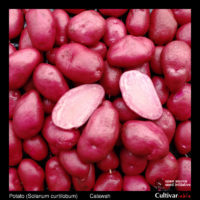 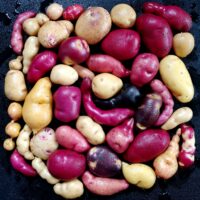 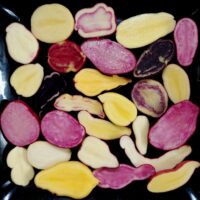 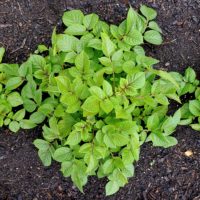 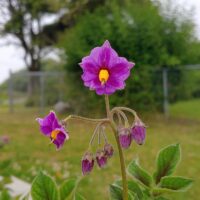 Calawah was grown from seeds of potato breeder Tom Wagner’s variety ‘Curt Schilling’.  Curt Schilling was selected from seeds of Solanum curtilobum, a lightly domesticated Andean pentaploid species.  S. curtilobum is often grown at higher altitudes than common tetraploid potatoes and has some frost tolerance.  As I understand it, the seeds were open pollinated.  In this case, it appears that there was probably a chance cross to a red variety with yellow flesh, since these are not traits normally found in Solanum curtilobum.

Calawah is an all purpose type, probably leaning a bit more to the waxy end of the spectrum than starchy.  When cooked, the flesh becomes uniformly pink.  Sometimes there is a hint of aftertaste with this variety that I have come to identify with Solanum acaule, one of the parent species of S. curtilobum.  I think that aftertaste probably indicates that the tubers have a high level of tomatine, the major glycoalkaloid of S. acaule.  Because the glycoalkaloids are probably a bit high in this variety, I no longer offer tubers of Calawah, but I continue to use it for breeding.

Calawah produces heavy yields of 3 to 4 inch long, oval tubers with either white and red or yellow and red flesh.  The tuber count is also quite high, usually between 40 and 50.  Calawah flowers and fruits heavily and appears to self-pollinate.  The plants are tough, tolerant of poor soils and drought and resistant to most of the common potato diseases here.

This variety has a notably plastic phenotype.  The plants and even the tubers appear quite different depending on conditions.  I have seen the plants take a low growing form with tiny leaves in drought, but also very large, upright plants when grown under irrigation.  The tubers also change, some years having yellow regions around the eyes and yellow flesh, but other times almost totally lacking in yellow.  I have never seen another potato do this.  Groping for explanations, I came across a paper (Cara 2019), that found evidence that aneuploidy can result in ongoing epigenetic changes.  Aneuploids are organisms that include a partial set of chromosomes.  Seed grown plants of the pentaploid species S. curtilobum, like this one, usually are aneuploid.  They have a ploidy in between tetraploid and pentaploid.  So, the variability seen in Calawah may be the result of an increased rate of epigenetic change.

The TPS of Calawah has been collected between 2017 and 2020 and was open pollinated.  I suspect that it is mostly selfed, but neighbors were Andean diploids and other S. curtilobum potatoes, so there could be some unexpected diversity.  I have grown quite a few plants from Calawah TPS and found that they are quite diverse.  About half of the plants will be short day, not tuberizing until fall.  The other half are effectively day neutral and will tuberize at any time of year.  The tubers are mostly reds and blues, with the occasional white.  Bicolors are pretty common.  Shapes are mostly oval to ovate, often laterally compressed.  There are about equal numbers of plants with long and short stolons.  You will get some varieties that are a little bitter from these seeds (maybe 10%) and I recommend that you discard those.