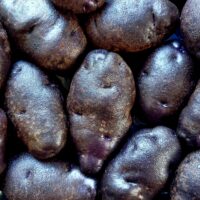 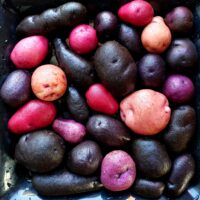 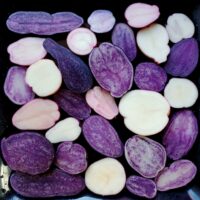 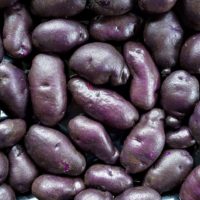 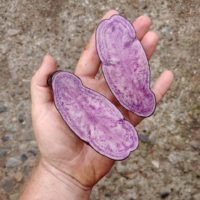 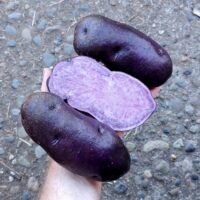 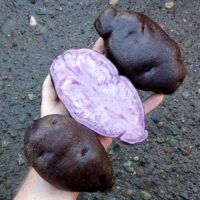 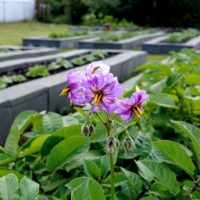 Gunter Blue is a Cultivariable original variety, selected in 2019. It is a medium-sized tetraploid with blue skin and flesh and very high yields. The female parent was Gunter Gold, a selection made from the Pacific Northwest heirloom variety Johnny Gunter, and the intended male parent was a selection out of Careta Amarilla, a Colombian diploid potato with intense yellow flesh. I suspect that cross didn’t actually take and that this caught some stray pollen from another variety, since a blue doesn’t make sense out of that cross.  Oh well, it was a happy accident!

Gunter Blue is a day neutral tuberizer with a late maturity. It is harvestable after about 100 days, but will continue to grow until killed by frost.  I found that it performed surprisingly well under dry conditions in 2021, so it might be a good one to experiment with when dry farming.  At full maturity, plants typically yield between three and six pounds. Stolons can range from about 2 to 15 inches, so this variety benefits from a little extra space.  The tubers are generally oblong, but less regular than commercial types, so you will get some that are extra long or have odd bends or unusual shapes.  Although it is a poor pollen producer, Gunter Blue is fertile and self compatible.  This variety is somewhat vulnerable to scab under dry conditions (as is often the case) but stays pretty clean with even soil moisture.

TPS of Gunter Blue is open pollinated and largely self-pollnated. It was grown in a block with other blue fleshed varieties.  It yields about half progeny with dark blue skin and blue flesh.  The other half are a mix of pinks and light blues with white flesh and red with light red flesh.  They are mostly late with short stolons, moderate to high tuber counts, and moderate to high yields.  It is easy to select plants that are very similar to the parent variety from these seeds.  Somewhat slow germination, probably indicating that this seed has some dormancy.