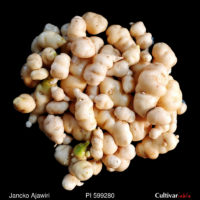 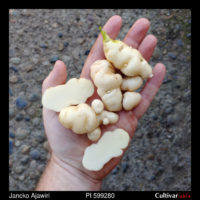 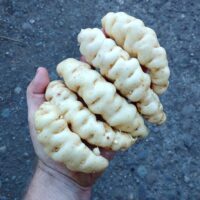 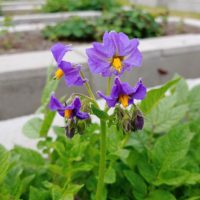 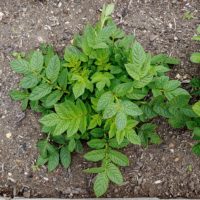 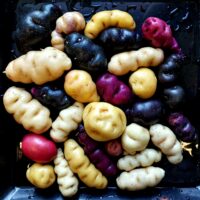 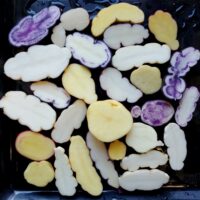 Jancko Ajawiri (white ajawiri – ajawiri is a cultivar group) is a variety of Solanum ajanhuiri, a frost resistant diploid potato species grown at the upper limits of cultivation in Bolivia and Peru. In our trial of the available accessions of this species, this variety did the best, surviving heavier frosts than other varieties. Jancko Ajawiri was provided by the USDA Potato Introduction Station as PI 599280. I plan to offer this variety indefinitely as our representative of S. ajanhuiri because it is the best example of the unique traits of this species and is also the most fertile of the varieties that I evaluated.

There is a traditional song for the planting of this potato that sums up its qualities nicely:

What frost! What hail!
I am the Ajawiri flower
I laugh at the snow
Pirouetting in the wind
I am the young Ajawiri

Jancko Ajawiri is an all purpose potato, with dense, moderately floury flesh and thick, chewey skin.   Tubers are small, with deep eyes.  This is a very good tasting potato.  I think it may have slightly higher sugars than normal and there is a very subtle sweetness to it that really shines when it is pan fried. The Aymara people of Bolivia prize this potato as the only frost-resistant species that can be eaten without processing into chuño.

Plants are smaller than tetraploid potatoes, with fine foliage similar to many diploids. They make a large number of blue flowers and flower for about two months, but they require a lot of pollen from other diploid potatoes in order to form berries.  Timing the tubers with this variety can be a challenge.  Maximum yields are obtained at about five months, but the tubers will also grow pretty crazy and tangled by that point.  Some will be sprouting, although, surprisingly, this doesn’t seem to have much effect on dormancy if the sprouts are removed.  At four months, the tubers are smaller, but generally cleaner and easier to harvest. At that point, yields are typically around a pound per plant, but you can almost double that at five months.  There is a picture showing the kind of crazy tubers that you can expect at full maturity in the gallery. Plants survive light frosts and overnight temperatures into the upper 20s.  Tubers have very long dormancy,

True seed was produced by pollinating flowers with bulk pollen from high dormancy diploids, so the progeny will not be pure S. ajanhuiri, although S. ajanhuiri is normally applied to both the initial hybrids of between the domesticated potato and Solanum boliviense and backcrosses made to the domesticated potato, so I suppose you could argue either way.  This should be good material to search for diploid potatoes with both good dormancy and some frost resistance.  Seeds are expensive because they require hand pollination to produce and the seed count per berry is low.  Of course, expense is always relative.  I have never seen seeds of S. ajanhuiri offered anywhere, so perhaps they were priceless until now.  Germination is a bit slow and irregular, but most seedlings were up within 14 days in my test.  If you pay close attention to the seedlings, you may notice that some have long, wild-type cotyledons among the majority of shorter, domesticate type cotyledons.

Seedlings produced tubers in mostly whites, light yellows, and blues, with a few reds, with the vast majority having the characteristic shape and deep eyes of Janck Ajawiri.  I expect that the color comes almost entirely from pollination by domesticated diploids.  The seedlings had mostly short stolons and reasonable yields, so I am optimistic about finding some good varieties with strong dormancy in the mix.  The seedlings were all much better berry and seed producers than Jancko Ajawiri.  Seedlings mostly had starchy texture and good flavor, with no bitterness.