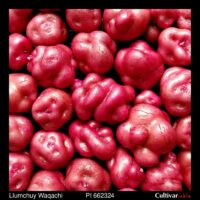 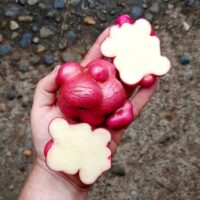 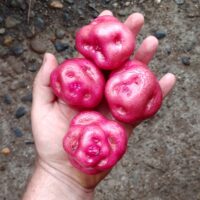 Llumchuy Waqachi is a somewhat famous Peruvian potato, known as “the potato that makes the daughter in law cry.”  This one tends to show up in National Geographic photos and the like.  The literal Quechua translation is “Daughter-in-law to-make-cry.”  Why does she cry?  Apparently, because this is a lumpy potato with deep eyes and she has to peel it as proof of her suitability.  Whether that is true or the just the Andean version of a Sisyphean task, I can’t say.  Llumchuy Waqachi is actually a cultivar group, so there is more than one variety that fits this description, but as far as I know, in the USA, there is only this one representative, so it isn’t too confusing to use it as a varietal name as well.

This is a pretty neat potato, especially if you are used to only seeing round, uniform grocery store potatoes.  Unfortunately, it is a bit challenging to grow.  Most Andean potatoes are short day tuberizers and don’t form tubers well until fall.  This one does alright during long days, but you won’t get the classic, really lumpy shape unless you grow them well into the fall, with consistent soil moisture, and get them up to a large size.  When they are smaller, they are much rounder.  There is a picture in the gallery showing the round form that you can expect if you don’t grow them late into the year.  It is a nice potato even if you can’t get the crazy shapes though.

At full maturity, tubers fall into the 4-6 inch range.  The bigger they are, the crazier they get.  The skin is medium thick.  Flavor is moderately strong but not bitter.  Texture is all purpose, probably leaning slightly more to the waxy end of the spectrum.

Plants and large and late, with facultative short day tuberization.  Yields of two to three pounds are achieved at full maturity in the fall, but only about a pound when harvested at the beginning of October.  This is a tetraploid variety and is self-fertile.  Plants flower abundantly and set plenty of seed.  Tuber dormancy is long.

True seed of this variety was open pollinated.  It grew in a block with other Andean tetraploid potatoes.  A majority of the seed is likely to be self pollinated, but there should be a fair amount of outcrossing as well.  In previous batches, I found that about a quarter of the progeny produced the same kind of lumpy, deep-eyed form as the parent.  Somewhat slow germination, probably indicating that this seed has some dormancy.