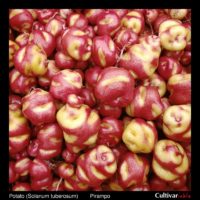 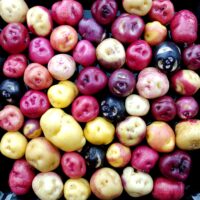 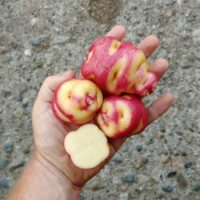 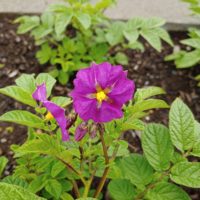 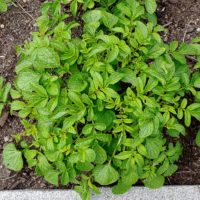 Pirampo is a Peruvian heirloom potato. It is a bicolor, red and yellow, diploid with moderately deep eyes.  Pirampo was provided by the USDA Potato Introduction Station as PI 619144.  I’ve done the work that I wanted to with this variety, so I had not planned to grow it again, but it was quite popular in 2019, so I will grow it again in 2020.

Pirampo is a starchy potato, with light, dry, white flesh.  It has the mild bitterness that most people describe as a strong “potatoey” flavor.  This is a good potato for roasting or baking.  The deep eyes make peeling difficult, but the thin skin means that you really don’t need to.  Potatoes nearly always taste better with the skin in my opinion.

Most diploid potatoes are short day tuberizers, but Pirampo appears to be effectively day neutral.  Tuber size at the top end is very good even from a summer harvest, reaching about five inches at the most.  It is possible that maturity might be reached earlier from a fall planting.  Summer maturity is about fourteen weeks under our conditions.  Stolons are very short, so the tubers will be clumped directly under the plant.  Tubers are mostly in the 2 to 3 inch range and yields are a bit less than a pound per plant.  This variety has little dormancy, so it begins sprouting again as soon as the tubers are mature.  When you harvest, you are likely to find that the larger and shallower tubers are already sprouting and the smaller and deeper tubers are not.  Save the smaller, non-sprouting tubers for replanting.  While they still won’t have great dormancy, they do store better than the large tubers that have already broken apical dormancy.  Low dormancy can be both an asset and a liability.  It is easy to get two crops back to back in the Pacific Northwest.  An April sowing can be harvested in late July or early August and immediately replanted for a fall harvest.  Pirampo flowers moderately and will set a good crop of berries if you have other diploid potatoes in flower to pollinate.

TPS was collected in 2019 and 2020 and was open pollinated.  It grew in a block with other low dormancy diploids and the progeny are very diverse.  They tend to be smaller, smooth skinned, yellows, reds, a smaller amount of blues, and many bicolor types.  The flavor is excellent and the texture tends toward the waxy end of the spectrum.  TPS of this variety is quick to germinate and typically has a very high germination rate, so it is a good one for beginners to try.