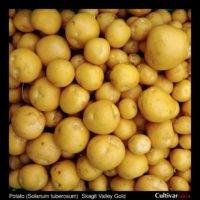 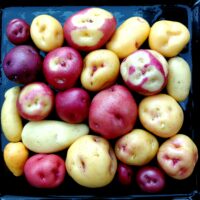 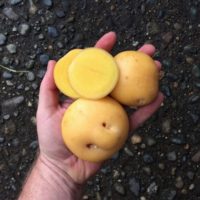 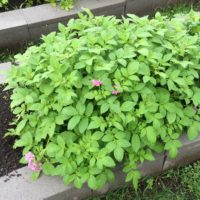 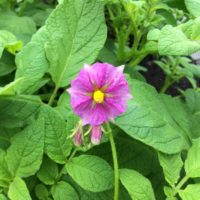 Skagit Valley Gold is an improved type of the potatoes commonly known as “papa criolla” or “papa amarilla.”  These small, yellow potatoes are very popular in South America, but they can’t be grown easily in North America because they don’t form tubers until very late in the year and have no dormancy.  Everett, Washington potato breeder Tom Wagner bred Skagit Valley Gold in 2002 to retain the characteristics of criolla potatoes but with earlier tuberization and better dormancy.  This is a great potato that should be much more widely grown.

Skagit Valley Gold is an all-purpose type, probably a bit more on the starchy than waxy side.  It cooks quickly and is easy to over-boil.  I usually prefer to roast it.  It has a rich flavor, but lacks the bitter elements that people usually associate with strong potato flavor.  Instead, you get a hint of almost carroty flavor, though without the sweetness.  Tom says this variety has a level of carotenoids 15 times greater than Yukon Gold and that is probably where the unique flavor comes from.

Skagit Valley Gold might be a totally day neutral diploid, which is unusual.  It is hard for me to tell.  It does grow better in the fall than the summer, but that might have more to do with weather than day length.  In the summer, I get tubers mostly in the 2 – 3 in range.  In the fall, I can get some monsters up to five inches in diameter.  Summer yields are about 1.25 lb per plant and I can usually get 2 lb per plant in the fall.  In the summer, the stolons grow longer and the tuber count is higher, reaching more than 30 per plant.

Skagit Valley Gold has reasonably good dormancy if harvested before full senescence, perhaps six weeks.  If left to grow too long, the tubers will begin to sprout again in the ground.  I recommend storing seed tubers in plastic bags in the refrigerator, particularly if you need to store them for more than three months.

Skagit Valley Gold flowers abundantly and sets seed easily.  Unfortunately, it produces very little pollen and appears to be effectively male sterile to me, although Tom Wagner says he has used it as a male.  True seed usually has strong dormancy and will germinate slowly in the first year.  The germination will almost certainly be better after the seed is stored for a year.

Skagit Valley Gold has poor scab resistance and is likely to suffer from scab in dry conditions or in soils with high concentrations of scab bacteria.  Maintaining a consistent, moderate level of soil moisture will minimize scabby tubers.  It also appears to be susceptible to internal rust spot, a physiological condition that can occur in calcium poor soils.  I have often observed this in our severely depleted soil.  You can manage that by amending with bioavailable calcium in areas with low soil pH.  It appears to have some resistance to early blight, insofar as we usually see early blight on the plants in the spring, but they typically recover as the weather dries out.  I have not observed any late blight on Skagit Valley Gold, but we typically don’t suffer too badly from late blight here.

Thanks to the USDA Potato Introduction Station, this variety has been cleaned of viruses for the first time in many years.  Most sources were previously infected with potato virus X, which reduced the yield.  I have been very impressed with the performance following cleanup.

Skagit Valley Gold TPS is open pollinated.  It was grown alternating with beds of Nemah, Pirampo, and Qoyllu, so those will be the primary pollinators.  From experience with those crosses, I predict that the seeds will produce a majority of round tubers in yellows, reds, whites, and blues, roughly in that order, with some bicolors as well.  This will be a good population to search for high yielding diploids with good dormancy and yellow flesh.  SVG seed usually has strong dormancy and will germinate slowly in the first year.  The germination will almost certainly be better after the seed is stored for a year.

In 2022 I also isolated Skagit Valley Gold and Nemah to make crossed SVG x Nemah TPS.  This cross has proven to be a source of heavy yielding yellow flesh diploids in the past.  This cross is available in smaller quantity than the open pollinated seed and will likely sell out quickly.