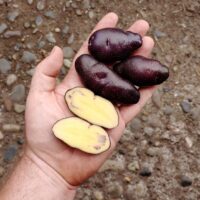 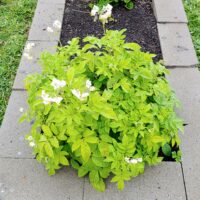 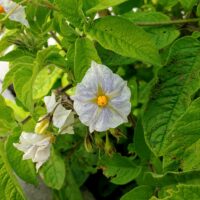 Valparaiso is a Cultivariable original variety, selected in 2020 from a cross between the Chilean wild potato Solanum maglia and bulk pollen from domesticated diploids.  The wild parent of this cross was collected just outside Valparaiso in the 1950s.  This potato is intended for use in breeding; I don’t advise eating it because the glycoalkaloid concentration probably exceeds the safety limit.  Valparaiso is very fertile, so you can use it to make crosses with other diploid potatoes, potentially capturing some of the interesting traits of S. maglia while hopefully also dodging the less useful traits, like bitterness.  You can read the history of this variety in a series of blog posts, beginning with Crossing Between Solanum Maglia and Domesticated Diploid Potatoes.

Valparaiso has dry, starchy flesh with good flavor.  I found it very pleasant to eat roasted, but there is a bit of a sour aftertaste, which indicates the the glycoalkaloids are high.  I can’t measure glycoalkaloids, so I don’t know how high.  Based on experience, I’d say this one is probably on the border and, therefore, probably safe to eat in a small serving, but I really don’t know.  I ate a six ounce portion without any trouble, but that doesn’t mean that everyone would have the same experience.  In 2021, I ate more of this potato and did not experience the aftertaste again.  To be safe, I don’t recommend eating this potato.

Valparaiso makes a pretty big plant and I wouldn’t grow it on anything less than a 15 inch spacing.  It was very slow growing from seed and I don’t yet know if it will be similarly slow from tubers, but I suspect not.  The stolons range from a few inches to a foot long, with most of the tubers clustered under the plant.  The plants flower heavily and have a long flowering period.  Tubers were dormant at harvest, but I don’t yet know how long the dormancy period is.  Plants set berries easily and may be self-compatible, which is unusual for diploids.  It might be the most interesting trait that could be captured from S. maglia.  Leaves often show signs of necrosis, a trait that I expected to be the result of infection with Potato Virus Y, but testing showed that this variety is clean for that and every other virus that I test for.  Lacking any likelier explanation, I think this may be a mild form of hybrid necrosis, a condition that sometimes results from incompatible alleles in interspecific crosses.

TPS was collected in 2020 and 2021.  Germination was intermediate, between the usually faster diploids and slower tetraploids, and was surprisingly uniform, with most seedlings up within 10 days.  Progeny are diverse, as you would expect from a wild cross.  Plants vary in form from those that are very similar in form to S. maglia to those more similar to domesticated diploids, with all sorts of interesting variations between.  Flowers were blue or white.  The seedlings were generally very floriferous with high berry counts.  Tubers fell mostly into four broad phenotypes: long blues or yellows with yellow flesh, round blues with yellow flesh, small light blue tubers with white flesh (similar to S. maglia), and long white tubers with white flesh.  Yields and tubers were typically on the low side, with a few outliers with larger tubers and heavy yields.  Most seedlings showed no resistance to late blight.  Some of the yellow flesh is surprisingly deep in color and is often accompanied by a blue ring.  Most tubers favored the domesticated traits and I think it should be relatively easy to get some varieties worth keeping from this seed.  I’ve only had one year to make observations, so it is early to say whether S. maglia provides anything particularly useful or interesting.