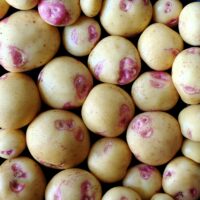 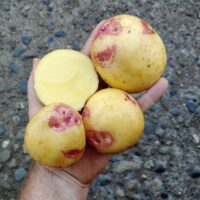 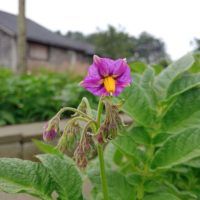 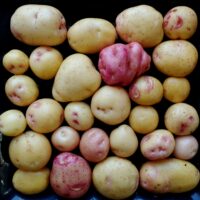 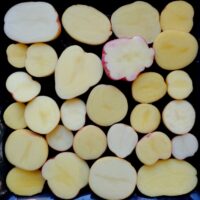 Plants are large with a late maturity. The stolons can grow pretty long, topping out around 18 inches. Yields reach nearly three pounds per plant in a sufficiently long growing season. The tubers are vulnerable to cracking with inconsistent soil moisture. The flowering period lasts at least two months and this variety sets berries well.  It is self compatible and produces a large amount of pollen.  While Yungay does not have comprehensive resistance to late blight, it does have resistance to older strains, which may be enough depending on which late blight strains are present in your area.  I don’t see much scab on this variety.  The tubers have good dormancy.

TPS was produced in 2020 and was open pollinated, although I also hit it with bulk tetraploid pollen several times throughout the season. I expect the majority of the progeny to be yellows from large, late plants, but there will probably also be some progeny of all colors.  Somewhat slow germination, probably indicating that this seed has some dormancy.