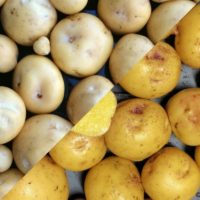 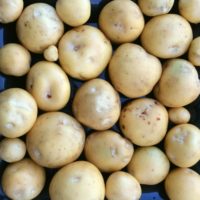 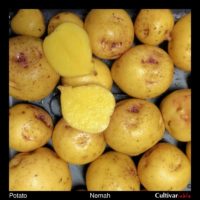 In 2019, I made several controlled crosses with Skagit Valley Gold, some of which produced some surplus.  This cross is SVG x Nemah.

Skagit Valley Gold is an improved type of the potatoes commonly known as “papa criolla” or “papa amarilla.”  These small, yellow potatoes are very popular in South America, but they can’t be grown easily in North America because they don’t form tubers until very late in the year and have no dormancy.  Everett, Washington potato breeder Tom Wagner bred Skagit Valley Gold in 2002 to retain the characteristics of criolla potatoes but with earlier tuberization and better dormancy.

This diploid potato produces small, two to four inch tubers with deep yellow flesh.  It has excellent papa amarilla flavor and texture and is a quick cooking variety.  It is either day neutral or of intermediate photoperiod and produces tubers here during the summer from a spring planting.  It has reasonably good dormancy if harvested before full senescence.  If left to grow too long, the tubers will begin to sprout again in the ground.  Skagit Valley Gold flowers abundantly and sets seed easily.  Unfortunately, it produces very little pollen, in my experience.

Nemah is a round diploid with yellow skin and flesh. It was selected out of a group cross between low dormancy Colombian and high dormancy Peruvian diploid potatoes. It has a number of interesting features, not the least of which is a rich flavor that hints of carrot. The tubers are small, mostly in the 2-3 inch range, with yellow flesh and yellow skin speckled with purple. It appears to be capable of self pollination, which is unusual for diploids. Tuberization is short day.

I hope from that cross to get some progeny that are substantially similar to SVG but that produce more pollen and better resist internal rust spot, which is a common problem in our depleted soil.  The tubers will likely be mostly round yellows and bicolors.

SVG seed usually has strong dormancy and will germinate slowly in the first year.  The germination will almost certainly be better after the seed is stored for a year.