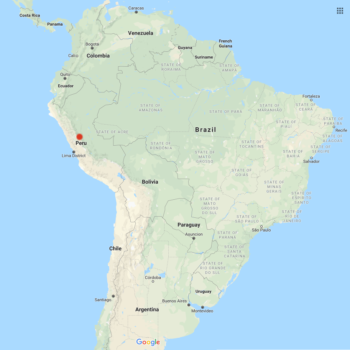 Solanum scabrifolium is a wild potato with a small distribution in Peru, where it grows in dry valleys between about 9,200 to 10,900 feet in elevation (2,800 to 3,000 m).  Plants are low growing, from a few inches tall to a bit more than two feet. Tubers white and moniliform, with multiple tubers along a single stolon.  Blue flowers and round berries.

The specific epithet, scabrifolium, means “rough leaves.”  It is formed from the Latin words “scaber,” for “rough,” and “folium,” for “leaf.”  While there is no completely standardized pronunciation for scientific names, the most common way to pronounce this species is probably so-LAY-num skab-ri-FO-lee-um.

Ochoa (2004) notes that the berries are called “shuructa,” which suggests that they might have some use.

Vega (1995) found that this species was less frost resistant than the domesticated potato.

I have found this species difficult to germinate, but only one accession is available, so I don’t know if that is a feature of the species or just the accession,

The following accessions were examined to prepare this profile.  I have evaluated 1/1 accessions currently available from the US potato genebank.

Low germination and slow growing seedlings.  The seedlings that survived did eventually begin to put on good growth.  I also got a second flush of germinations two months after sowing, so patience is rewarded with this accession.

EBN has not been established for this species, but I have marked it provisionally as 1EBN.  Spooner (2010) shows that it groups closely with S. cajamarquense and S. mochiquense, both of which have 1EBN.