This is the first of what will be a series of posts about potato characteristics.  One of the first things that I recommend to new plant breeders is to thoroughly explore the morphology of the plants that they work with.  There are some people who are able to look at the world around them naively and yet see it in great detail.  These people often have great artistic ability.   It is a special way of seeing things that I lack, unfortunately.  I am a pretty reductionist thinker and benefit from systems of classification that break the world down into identifiable parts.  Once I have a structure to work with, I am able to see details that disappeared into the background before.

If you want to breed plants, you have to make selections and, in order to make selections, you have to be able to clearly recognize traits.  Beyond simply recognizing them, it is important to have a vocabulary to describe them.  We are lucky with the potato, because a standard set of morphological traits have already been set out in the IBPGR Descriptors for the Cultivated Potato, which I will use throughout this series of posts.

Sprouts are a sensible place to start, since they are the basis of a new crop.  Sprouts can tell you something about the color genetics carried by the plant.  They have long been used as one of the key characteristics when identifying varieties, particularly in the white potato world, where sprout color is sometimes the only easy way to distinguish between varieties without growing out the plants.  Blue potatoes will typically have at least a little blue in their sprouts and red potatoes will have some red.  White and yellow potatoes may have sprouts of any color.  They are often green (white when kept out of the light), but can also be red or blue.  When a white potato has red or blue in the sprout, that is an indication that it carries the corresponding allele for that color, but that the color is not expressed in the tubers because a distribution allele is lacking. 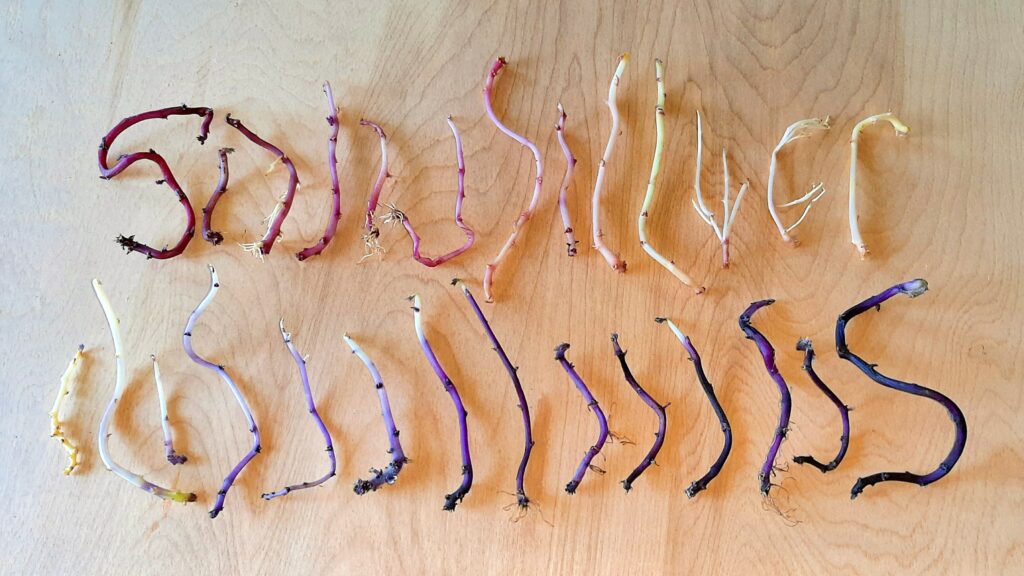 The image above shows sprouts in both of their color spectra, reds above and blues below.  When the tubers carry color, a darker sprout usually corresponds to darker tuber color, but the reverse isn’t always the case.  I frequently see potatoes that have very dark color but sprouts that are lightly colored.  You can see that the color is distributed differently in some of these sprouts.  Some are completely colored, while others carry the color close to the base, at the nodes, or fade from the base toward the apex.

These are pretty much self explanatory.  The only quibble I have is with the term “scattered”.  I think a better word would have been “graded” or “blended,” as “scattered” suggests discrete regions of color, which is something that I have rarely seen in a sprout.

You might have noticed that the descriptors don’t include the size of the sprout.  There are differences in sprout diameter between varieties and thicker sprouts are often associated with plants that are faster growing and have higher yields.  This isn’t easy to classify though, since tuber size and storage conditions affect sprout size.

Most people probably don’t pay much attention to sprout color, but if you are working with a large collection, it is a good idea to note the sprout characteristics for your varieties.  This has saved me more than once when I lost a label or mixed up bags and I had to narrow down the possibilities between similarly colored tubers.

Next up will be stems, which are similar to sprouts, but a little more diverse in color and form.