If you have looked at this page before, you might need to do a forced refresh to see the latest version.  Thats usually CTRL+F5 for Windows, Command+R for Mac, and F5 for Linux.

Update 7 Apr, 2020: Most orders are shipping in about two days right now.  This will probably be the last week for oca, yacon, and potato tubers. 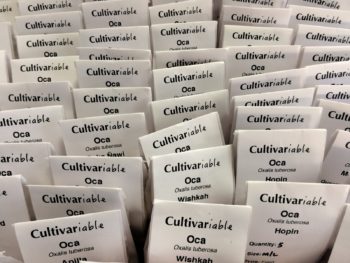 The shelves are looking a bit bare, but what is on them is fresh…

Cultivariable is going through a transition from the practice of growing our roots and tubers repeatedly in the field to a process where we start from tissue cultures, followed by screenhouse multiplication, and only a single generation in the field.  This process will better control diseases in the crops that we offer, yielding a higher quality product.  A number of new diseases have been discovered in the Andean tuber crops recently and it is better to stop and ensure that things are as disease free as possible now than to continue on breeding with varieties in a questionable state of health.  This transition is costly and time consuming and will probably not be complete any sooner than 2021.  As a consequence, many varieties will not be available for the foreseeable future.  Many of the heirloom varieties will probably not be back at all.  They don’t perform as well as my selections and they are much more likely to be carrying unknown viruses, so the most cost effective strategy in most cases is to simply stop growing them.

In the future, I will be focusing my efforts a bit more narrowly.  The majority of my work will continue to be with mashua, oca, potato, ulluco, and yacon.  I will continue to grow the other Andean root and tuber crops, but I don’t anticipate offering them in the catalog until I have varieties that represent significant progress.  I continue to do quite a bit of work with sea kale, dahlia, and skirret, so those should appear in the catalog every year.  The other minor crops that we have offered in the past may only appear every other year.

The good news is that, by specializing a little more, I expect to have greater capacity for the big five crops, so, once we get through this transition, we should have more varieties than ever of mashua, oca, potato, ulluco, and yacon.  This is particularly true with potatoes.  I have a lot of great varieties, but disease management is so difficult with potatoes that I have been reluctant to multiply them for sale in the past.  We now should be able to offer much more potato diversity with greater confidence.

So, stick with us.  It could be a long wait for some of your favorite varieties to return, but they will be back along with a lot of new ones as well.

I have had several people ask if they should continue to grow the heirloom varieties.  I am somewhat ambivalent on this subject, due largely to my own ignorance.  I am taking the conservative approach and trying to eliminate anything suspicious.  If you want advice, then I recommend being conservative.  If a variety isn’t currently listed for sale in our catalog, then I don’t recommend growing it.  There is no heirloom variety that I trust, not because I know that they are infected, but because I don’t know if they are clean.  All of these crops have been grown continuously in the US since at least the 1970s and longer than that in some cases.  Some, like yacon, are grown on a relatively large scale (compared to something like ulluco or mashua which are probably grown exclusively at back-yard scale).  I have no reason to think that they were not carrying diseases that entire time.  Obviously, the world hasn’t ended.  Probably, that is because they are grown on such small scale, don’t come into contact with other crops, and, possibly, any diseases that they carry don’t transmit very easily.  However, these crops are also experiencing a little boom in popularity, which means that the exposure is increasing.  The absolute safest thing that you could do is eat up whatever you grow, don’t plant again, and wait for us to release new, verified clean varieties.  I don’t have all the answers, unfortunately; I’m learning as I go.