Four important tuber crops were developed in the Andes: potato, oca, mashua, and ulluco (Ullucus tuberosus), pronouced “oo-YOO-ko”.  Ulluco is probably the most widely consumed of these crops after the potato, but is almost unknown more than a day’s drive from the high altitudes in the Andes where it is grown. The tubers are particularly beautiful, mostly vivid yellow, orange, or red/purple, colors that are created by high concentrations of pigments that act as antioxidants. The flavor is starchy like a potato, but also earthy like a beet. The leaves are also commonly eaten, raw or cooked. Ulluco is a tricky plant to grow, as it grows poorly when temperatures exceed 75 degrees and requires a frost-free growing season through at least mid-November. 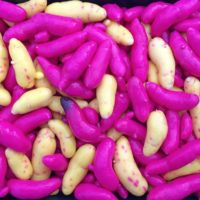