There are some questions about potatoes that I get over and over again, like whether or not potato towers work, what the mysterious fruits on potato plants are, and whether or not greened potatoes are dangerous.  This post is about one of those frequently asked questions that I hadn’t gotten to yet: why is my potato plant growing tubers on the stems? 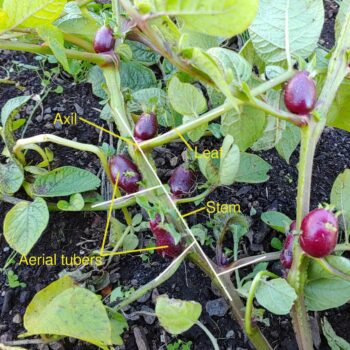 On occasion, potatoes, and many other tuber forming plants, form aerial tubers.  Normal tubers grow below ground on stolons.  Aerial tubers form above ground on the axils of the stem.  The axils are the point where the leaves join to the stem and aerial tubers form inside that angle, connected directly without a stolon.  Some people initially mistake these for berries, but the berries of the potato plant are formed on long inflorescences, well away from the stem.

You can think of potato leaves as factories that produce sugar from sunlight and atmospheric carbon.  Two rail lines connect these factories to the rest of the plant.  The xylem line runs north, bringing water and minerals from below the ground up to the foliage, while the phloem line runs south, allowing for the transport of sugars down to the tubers (the storage depot).  Aerial tubers result when the phloem line becomes clogged or broken or when the storage depot is either damaged or full.  The factories keep making sugars and they have to go somewhere, so the plant forms tubers of last resort at every available bud.

Probably the most common reason for aerial tubers is a broken stem.  The break may not be obvious, because it can happen below ground.  Insects or other animals may also chew the stem.

Another common reason is disease.  The phloem may become clogged, as can occur with a bacterial infection.  Also, the stem may rot near to, or just below, the ground, as often happens with fungal infections.

In the case of broken or rotted stems, you might expect the stem to wilt, but you will often find that these stems have rooted where they touch the ground.  They are still able to take up water from the soil and transport it up the xylem line, but the phloem line is permanently broken.

Sometimes the cause is not found in the stems though.  You may find that an animal has burrowed under the plant and eaten the tubers, leaving the plant with a sudden excess of sugars and no place to put them.  Plants grown in small pots may run out of space, unable to squeeze anything more into the tubers.  Although it is not very common with commercial varieties, large, late varieties sometimes just seem to produce sugars faster than they can expand the tubers.  You may find an entirely healthy plant with a good crop of tubers that just outdid itself.

Most of the time, aerial tubers are an indication that you are going to have a disappointing harvest.  If you’re lucky, tubers formed before the problem began and you’ll have something, even if they are smaller than usual.  Potato plants typically have more than one stem and you will usually have tubers from stems that are still intact.  But if the break happened early, before tuberization got rolling, the plant may produce nothing.

Aerial tubers look a bit different from their underground counterparts.  They are typically darker in color, having been exposed to sunlight.  They also often form leaves, like an intermediate form between a stem and a tuber.

You should not eat aerial tubers, since you can assume that they have high glycoalkaloid content from sun exposure.  You can use them to propagate new plants, just like underground tubers, but they tend not to keep very well if they have leafed out.  There may sometimes be an advantage to starting plants from aerial tubers though.  If the cause of the problem was disease, aerial tubers taken from above the region of stem that was affected will often be uninfected.