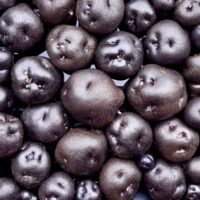 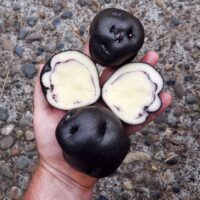 Quintay is a Cultivariable original variety, selected in 2021 from a cross between Valparaiso and Ayock.  Valparaiso is a hybrid between a domesticated diploid and the wild species Solanum maglia, so Quintay is 1/4 S. maglia.  I have grown a lot of seedlings of various crosses with Valparaiso and this is one of the few that stands out with an abundance of domesticated traits.  The name Quintay was selected as part of a theme of place names near Valparaiso.

Quintay has dry, starchy flesh with very good flavor.  There is no hint of bitterness in this one, so it has lost the high glycoalkaloids of its parent.  The skin is thick and chewy, a little bit more than I would like to be honest, but not so much that I would peel it.  It would make an interesting smaller baked potato.  We gave it top marks halved and roasted.

Quintay plants are compact and should do fine on a 10-12 inch spacing.  Stolons are reasonably short, mostly eight inches or less.  Maturity is about 60 days.  Yields about 1.2 pounds per plant with 5-8 tubers.  They flower modestly but are extremely fertile and set a perfect crop of berries.

TPS was collected in 2022 and this is a new offering, so I can’t tell you what to expect.  The seed will have been widely pollinated by other diploids and the closest were other seedlings out of Valparaiso.  Blue tends to be dominant over other colors, so I would expect a majority to be blue.  I would also not be surprised to see many with yellow flesh, since that is a common trait among the most likely pollinators.