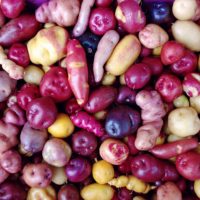 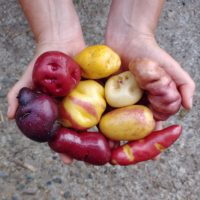 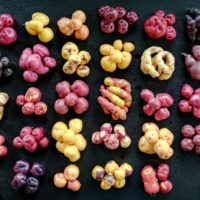 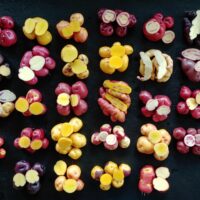 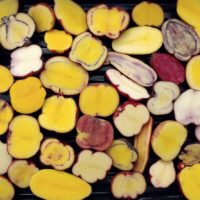 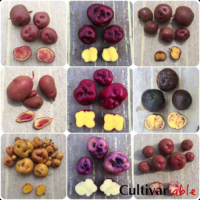 Diploid domesticated potatoes are not commonly grown in North America.  They are native to the Andes.  Diploids tend to be smaller and have lower yields than common tetraploid potatoes, but they compensate for this with richer flavors, beautiful colors, and unusual shapes.  There are two very good reasons why diploids aren’t commonly grown in North America: many of them have little to no dormancy, which makes them difficult to store over the winter, and many of them have short day photoperiods, which means that they don’t produce tubers until fall.  These deficits are not universal and I have spent about 10 years now selecting plants that tuberize well during the long days of summer in Washington.  This mix contains seeds an intermingled population of low dormancy (phureja) and high dormancy (stenotomum) diploid potatoes, most of which were selected from genebank accessions.  Some plants grown from this mix will have dormancy and most will tuberize in the summer, although it might take them a little longer than it would in the fall and they might have other quirks like longer stolons when grown in the summer.  Still, if you grow a full packet, you can expect to get plenty of plants that will make tubers in the summer and last through the winter.

The picture above is an output photo of a full bed of seedlings grown from this mix, so it will give you a pretty good idea of what you can expect. What it doesn’t show are the plants that produce tiny tubers or no tubers or that died early in the season. You will always get some of those when you grow potatoes from seed.

The mix of parents change from year to year, typically by about 20%, so seeds of different years can supply additional diversity.  Seeds that are a year old may also germinate a little better than current year seeds.