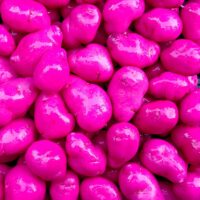 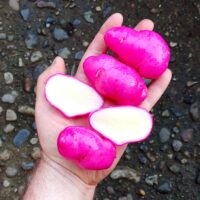 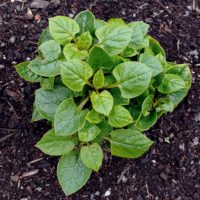 Tatsolo is a Cultivariable original variety, introduced in 2019.  It is notable for large average tuber size, well clustered tubers, and a strong flavor.  This variety is very similar to Moclips, but I currently keep all promising varieties, whether redundant or not, because it is so hard to produce new varieties.

Tatsolo has a strong beet-like, earthy flavor, which appears to be the case for most red varieties.  It is not as mucilaginous as many varieties and it bakes and fries well, producing a result with a moist texture.  The red color is retained well in dry cooking methods, less so when boiled.

Tatsolo plants are large and spreading. They will produce tubers over about an 18 inch radius at maturity. As with most ulluco varieties, the largest tubers are those found directly under the plant, while tubers formed on descending stolons are later and, therefore, usually smaller. Tatsolo drops descending stolons a little earlier than most varieties, so the late tubers tend to be a bit larger.  Average yield is 1.9 pounds at mid-November. Maximum tuber diameter is 4.8 inches. Tubers are about equally divided at the two inch size, half larger and half smaller.