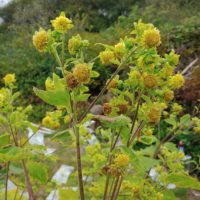 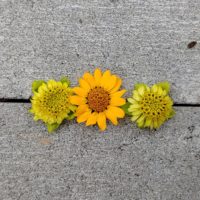 Smallanthus connatus is a close relative of yacon, more commonly known in South America as yacon gaucho.  It may be useful in yacon breeding but is not really itself an edible plant.  It has been used as a medicinal, so it doesn’t appear to be dangerous to consume in small amounts, but I don’t think anybody has really tested it.  Unlike yacon, it does not make storage tubers.  It makes a large cluster of thickened roots, much like yacon produces before they begin to bulk up.  S. connatus looks very similar to yacon, but flowers earlier and much more abundantly.  Flowering begins here in early August.  It may be of interest as an ornamental.  It is extremely attractive to pollinators.  Climate tolerance is similar to yacon, but it is more difficult to store over winter, since it does not produce crowns in the same way as yacon.  It should be possible to leave it to overwinter in the ground down to USDA zone 8 or so, particularly if you mulch over it.

I have obtained seeds in bidirectional crosses with yacon, but have not managed to get any to germinate yet.  Unlike yacon, S. connatus produces seeds readily and abundantly.  The seeds germinate at better than 50% when sown as we describe for yacon.

I grow S. connatus right next to yacon in order to maximize the possibility of chance crosses, so keep an eye out for unusual plants; you might be lucky enough to find a cross.