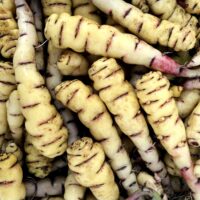 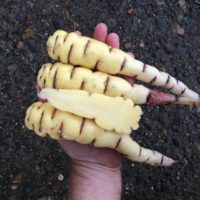 Ahahawat is a Cultivariable original variety, introduced in 2018.  I selected this from open pollinated seedlings of our Original variety ‘Copalis’.  I suspect that the pollen parent was probably Q’illu Isanu, but that is based purely on appearance.  This is a great all-around variety for the home grower.  If I could only grow one mashua variety, I would pick this one.

Because so many of these tubers are huge, you will often get just one in a two tuber packet that has been cut into two or three pieces.  That is still more planting material than you get with most other varieties.  All pieces are guaranteed to arrive in good condition and sprout – when you cut the tubers it is at your own risk, but when I cut them, it is mine.  Ten tuber packets contain 10 individual tubers because I save the medium to small tubers for those packets.

Ahahawat tubers are large, frequently reaching a foot in length.  At full maturity, they are light yellow with purple eyes.  Harvested before full maturity, they are white, with just a little bit of yellow at the tip.  Color is retained in dry cooking, but will eventually be lost in wet cooking.  Flavor varies, even within a single tuber, with the tail end typically being sweeter and milder, but overall is excellent, slightly sweet and cabbagey with no bitterness or flowery aftertaste.  I think it is one of the best mashuas that I have tasted.  Mashua tubers take two forms; they can narrow at the point of attachment to a very clearly differentiated stolon or the tuber and the stolon may be undifferentiated, so you get very long tubers that take on more of a stolon-like character toward the end, including a lot of rooting from the eyes.  Ahahawat is the latter type.  There are advantages and disadvantages to this trait.  You get more food, but the stolon-like end of the tuber needs more cleanup to remove the roots.  If you are feeling lazy, you can just cut off the lower third of the tuber and skip the cleanup.

Plants are large and vigorous with very high yields.  On trellis and with plentiful water, this variety can produce 15 pounds of tubers or more per plant.  The tubers are very large, averaging about 8 ounces, and very long, easily reaching a foot in length.  Because of the large size, this variety needs quite a bit of space, with a minimum in row spacing of 16 inches.  Because the tubers are long and tapering, they have a tendency to break when harvested.  Broken tubers don’t store as well, which is why I don’t recommend this variety for commercial growing, despite the large yield.  Home growers should have no trouble taking it slow with the harvest and keeping most of the tubers intact.  Tubers set deeply and spaced out nicely, so they are typically uniform and unbothered by pests or other damage.  Dormancy is intermediate in this variety; I normally see sprouting beginning in March.  I have observed relatively little bacterial staining on this variety.  Ahahawat will keep growing well into winter if not killed by frost and the tubers keep getting bigger.  Ahahawat is a typically late flowerer, starting in early November, but it will produce seeds if you can keep it going until the end of the year.