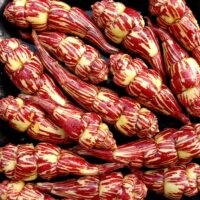 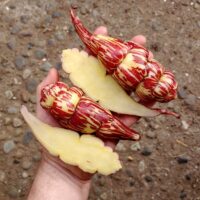 Candy Cane is probably a Peruvian heirloom variety, although I’m not really sure of its origin.  Since it lacks a native name, I informally called it “Candy Cane,” and that name has stuck.  Don’t expect it to taste like peppermint though.  I don’t offer a lot of heirloom mashuas anymore because they tend to be infected with viruses that are hard to remove, but this one is now disease free within the limits of my testing.

This is one of the most spectacular looking mashuas that I have seen.  The flavor, unfortunately, doesn’t match the incredible appearance.  It’s not bad; it just isn’t a variety that I would normally choose to eat with so many other options.  It is a bit cabbagey, slightly flowery, and non-sweet.  The texture is a bit watery.  It will probably perform better in a wet dish like a stew than eaten plain.

This is a large variety, reaching about eight feet on trellis.  High yield and moderate tuber count, which, as you can probably deduce, means that the tubers are large.  Intermediate dormancy, with sprouting usually beginning in March.  The root balls are right on the edge of what I can pull without tools.  The flowers are redder than most varieties in the collection, with the exception of Puca-anu.  It is a fall flowerer, but if your growing season is long enough, you can collect a little seed from it.