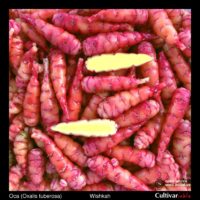 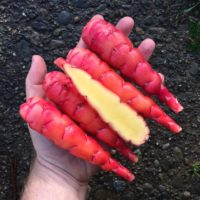 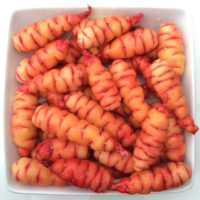 Wishkah is a mildly acidic variety, just tart enough so that you wouldn’t mistake it for a potato, but not so much that it won’t serve in just about any potato recipe. It is very slightly sweet and the yellow flesh is moderately firm even when cooked.  Like most oca varieties, it loses most of its color when cooked.

Wishkah plants are tall, with a large number of stems, and sprawling at maturity.  The tubers are formed on long stolons, which helps to prevent crowding and increases uniformity, but also means more digging to find them all.  Tuberization photoperiod is about 13 hours, making it two to three weeks earlier than most of the heirloom varieties.  Average yield is 2.5 pounds.  The maximum tuber length is 6.4 inches and the average tuber length is 2.9 inches.  Average tuber count is 22.  Wishkah typically produces both the highest yields and largest tubers of any variety that we grow.

Wishkah is a heavy flowerer with a mid-styled flower.  It is consistently among the top three producers of true seed here, along with Redshift and Siwash.

True seeds were collected in 2020 and were open pollinated.  Wishkah is mid-styled and therefore self-compatible, so I expect a portion of the seeds to be self-pollinated, but the majority will probably be crossed.  The closest neighbors in 2020 were Sockeye and Adele, both of which are compatible and would be the most likely partners.  From experience, I expect true seed of Wishkah to give a greater percentage of early varieties with larger tubers than most other varieties.  Plants will mostly be large.  Tuber color is not predictable.  I only offer oca see that germinates at 80% or better in my tests, but some people still report no germination because oca is tricky.  So, set your expectations low and hopefully you will be happily surprised.