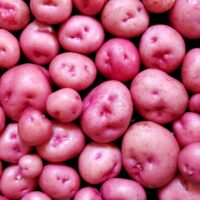 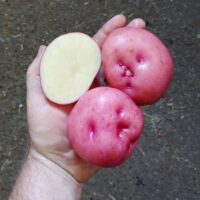 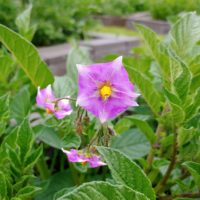 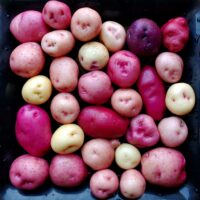 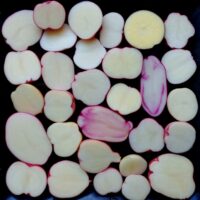 Kinigi is a modern tetraploid variety, bred by the International Potato Center (CIP).  This is a very popular variety in Rwanda, known for its high yield and late blight resistance.  It has red skin and white flesh.

Kinigi has a starchy texture and thin, smooth skin. It is probably better suited for dry cooking methods than wet. The flavor is good, slightly nutty, but not particularly strong. Tubers are round and typically reach three to four inches in diameter.

Plants are medium sized with a late maturity. The stolons short, six inches or less. My yields were in the vicinity of 2.5 lb per plant. The tubers demonstrated good drought resistance here, with no cracking, malformation, or scab. The flowering period lasts about a month. Kinigi appeared to me to be self-compatible, but I did not test it carefully. While Kinigi does not have comprehensive resistance to late blight, it does have resistance to older strains, which may be enough depending on which late blight strains are present in your area. The tubers have good dormancy.

TPS was produced in 2020 and was open pollinated, although I also hit it with bulk tetraploid pollen several times throughout the season. I expect the majority of the progeny to be similar to the parent, reds with white flesh and later maturities.  Because it was outcrossed, there should also be some progeny of other colors.  Somewhat slow germination, probably indicating that this seed has some dormancy.