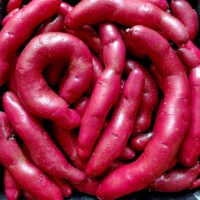 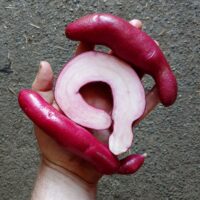 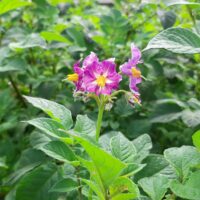 Because some Papa Cacho tubers grow very long, large packets may only contain three tubers instead of the usual five.  They will still give the same number of plants (12-15) when cut into seed pieces.

Papa Cacho (“horn potato”) is a landrace potato originally collected on the Guaitecas archipelago of Chile, bordering the more famous potato growing region of Chiloe.  It is a member of Solanum tuberosum group Chilotanum, potatoes that adapted to lowland Chilean conditions and and became a distinct population.  Chilean potatoes tuberize under long days, unlike Andean potatoes, but they are also almost entirely male sterile.  The primary virtue of this variety is immediately obvious: it has wonderfully long, serpentine tubers.

I grow this variety primarily for TPS.  I offer tubers when I have them, but this is a pretty common variety and you can probably find them in greater quantity and lower cost elsewhere.

This variety is frequently reported to be Peruvian, which is definitely not the case.  The confusion seems to have resulted because it was first imported to the USA from a genebank (International Potato Center) based in Peru.  But their records indicate that it was collected in Chile and its traits are consistent with Chilean potatoes.

Papa Cacho has a dense, waxy texture. The flavor is good but not particularly remarkable. Skin is just thick enough to have a little chew. The size makes it a great choice to cut into segments and roast in the skin. It also makes a nice salad potato. Flesh color is white with some pink and that is mostly retained in dry cooking.

Papa Cacho is a large and, eventually, sprawling plant, topping out at about three feet.  It is late, with maturity at about 150 days here.  You might want to harvest this one early for tubers of a more uniform and manageable size.  If you want it to be a fingerling, with tubers that are 5-6 inches long, try pulling some of the plants at 90-100 days.  Left to grow to full senescence, the tubers tend to grow bulkier and lumpier, losing some of their characteristic shape.  Yields have averaged 3.3 pounds per plant here.  Tubers have strong dormancy and will store well for at least four months.

Papa Cacho has blight resistance typical of late varieties, but it won’t hold up indefinitely under modern strains of blight.  Unfortunately, it is pretty vulnerable to potato virus Y.  Tubers are somewhat vulnerable to jelly end, a physiological condition that occurs under conditions of uneven soil moisture.  In general, long fingerlings require moderate and uniform soil moisture in order to produce well shaped tubers.

Papa Cacho flowers heavily but holds flowers and berries poorly.  As is usual for Chilean potatoes, this variety is male sterile and its female fertility is not great either.  It drops a lot of flowers even when pollinated.  Due to the large number of flowers, getting a few berries is no trouble, but if you want a heavy crop, I recommend pollinating each flower at least twice a day using either bulk pollen or from a variety with strong fertility.

Papa Cacho TPS was collected in 2020 and 2022.  Flowers were pollinated with bulk pollen from red and blue flesh tetraploid potato varieties.  In 2022, it grew next to Muru, a producer of abundant, fertile pollen, so I expect to see plenty of it in the seedlings as well.  I also pollinated heavily with pollen from Deah, a descendant of Ozette with a fertility restoration gene.  Keep an eye out for seedlings that have normal anthers (Chilean potatoes tend to have withered/deformed anthers) and that set berries easily.  Those may have received the fertility restoration gene and become male fertile.  About a third of seedlings keep the fingerling/serpentine shape to some degree and most are either red or blue with some colored flesh.