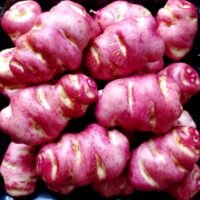 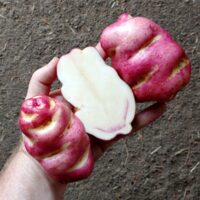 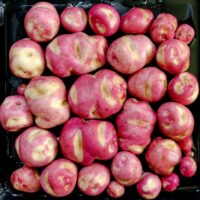 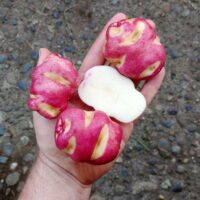 SVG Champion was selected by customer Bill Olsen from our Skagit Valley Gold TPS.  It is the most impressive diploid potato that a customer has ever sent for me to trial.  Based on its characteristics and the knowledge of the varieties that Skagit Valley Gold was interplanted with in the year that his seed was grown, I think this is most likely the result of a cross of Skagit Valley Gold x Pirampo.  It certainly looks a lot like Pirampo, but it is an improvement on that variety in almost every way but flavor and perhaps color, which is not quite as vivid.

SVG Champion is a waxy potato, suitable for many purposes, but probably not ideal for frying.  The flavor is good but not special, very mild with no bitterness.  Skin is moderately thick and chewy, but not unpleasantly so.

SVG Champion is a day neutral diploid with mid-season maturity.  Yields are about 1.5 lb per plant with an average tuber count of only 14 per plant, so the majority of the tubers are medium to large.  Tubers top out at about 7 inches in length.  Stolons are short, usually less than six inches.

SVG Champion has reasonably good dormancy.  It began sprouting after about four months last year.  I don’t have long experience with this variety and dormancy may vary depending on how long the plants are allowed to grow.  I have observed the occasional tuber sprouting at harvest, which may indicate that fully mature tubers left too long in the ground will break dormancy.

This is a modest flowerer, setting relatively few berries compared to either of the putative parent varieties, but it is not difficult to collect some seed as long as you have a diploid pollinator.  Like Skagit Valley Gold, SVG Champion produces very little pollen.

SVG Champion is vulnerable to scab and cracking, conditions that suggest that it will perform best where there is consistent soil moisture.  I found it to be quite resistant to late blight, developing very few lesions in a bad blight year and the lesions also appeared to be dry and dead, not sporulating.  One season is not a rigorous evaluation, but I think this variety is worth trying where blight is a problem.

True seeds were not produced in abundance and I’m not sure if I will have enough to offer in 2021.