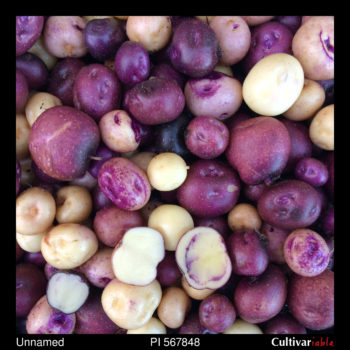 An Ecuadorian andigena-type tetraploid potato, originally collected at a farm near Cañar in 1991.  It was reported by the farmer to have grown there wild for more than 60 years and to taste excellent.  The collector description reports round fruits and tubers with white skin and purple flesh.

TPS. Slow germinator, 9+ days.  Intermediate germination.  Round to compressed. Most less than 3 inch diameter. Blues and whites. Flesh white to light yellow, sometimes with blue vascular ring. Very long stolons. Late season, probably short day. Huge numbers of large, round berries, but the berries have a relatively low seed count. Abundant pollen. Good dormancy. Plants large and healthy until killed by frost.  The white and yellow tubers of this accession turn purple with exposure to light, rather than green.

Not a particularly interesting accession due to the long stolons.  Some stolons were as long as five feet.  Perhaps this is a wild species hybrid?  The fact that the tubers turn blue with exposure might be evidence for that.  I had hoped to see tubers with white skin and blue flesh, but no such luck.  It might be worthwhile to cross it with a better behaved blue flesh potato to see if the reported white/blue combination reappears.  Sampled some randomly for flavor and they ranged from acceptable to good.  Strong flavor, perhaps verging on bitterness in some cases.