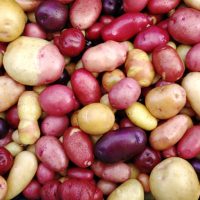 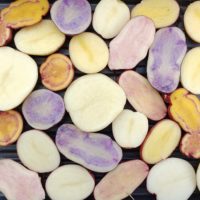 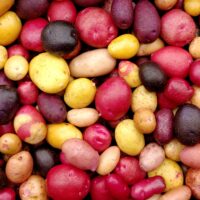 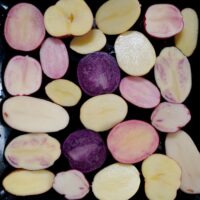 Beginning this year, we no longer offer seeds from previous years.  Instead, seeds collected over the past five years are all mixed together.  There is little difference in germination over five years and this increases the diversity of the mix, while reducing the complexity that we have to manage.

The potatoes that most of us are familiar with are tetraploid.  Virtually any potato that you find at the grocery store is a modern tetraploid variety.  Tetraploids tend to be larger and higher yielding than other types of potatoes.  They also usually have one very important trait: dormancy.  Tetraploids will usually have at least eight weeks of dormancy, which makes them pretty easy to store through the winter.  This mix includes modern tetraploids and also Andean tetraploids.  The modern tetraploids tend to be better adapted for North America, but they aren’t as diverse as Andean potatoes.  The Andean tetraploids have a greater range of shapes and skin and flesh color, but some of them won’t produce tubers until fall due to short day photoperiod.  Between the two types, you can expect a lot of variability in the seedlings.  I’d say that the mix runs about 60% Andean and 40% modern most years.

This is one of the few products that we offer where we include seeds produced by other growers.  As much as 1/3 of the mix is TPS from other growers and breeders that I trust.  That increases the diversity of types, since I grow relatively few modern tetraploids.