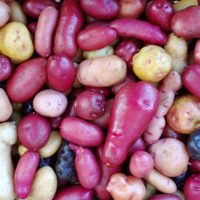 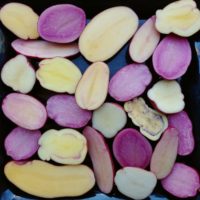 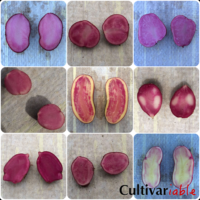 This mix contains seeds collected from red tetraploid potatoes.  I mostly aim for those that have at least some red flesh, but occasionally include a few that have only red skin if they are really good.  Because the seeds are collected from reds, you are much more likely to get reds, but tetraploid potatoes are genetically complex, so you will get other colors as well.  Think of this mix as maximizing your odds of getting potatoes with red skin and/or flesh.

The potatoes that most of us are familiar with are tetraploid.  Virtually any potato that you find at the grocery store is a modern tetraploid variety.  Tetraploids tend to be larger and higher yielding than other types of potatoes.  They also usually have one very important trait: dormancy.  Tetraploids will usually have at least eight weeks of dormancy, which makes them pretty easy to store through the winter.  This mix includes modern tetraploids and also Andean tetraploids.  The modern tetraploids tend to be better adapted for North America, but they aren’t as diverse as Andean potatoes.  The Andean tetraploids have a greater range of shapes and skin and flesh color, but some of them won’t produce tubers until fall due to short day photoperiod.  Between the two types, you can expect a lot of variability in the seedlings.  I’d say that the mix runs about 50% Andean and 50% modern most years.