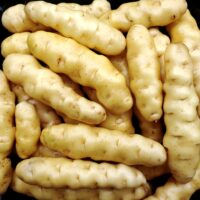 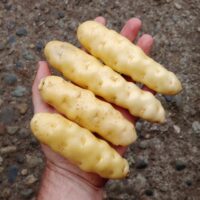 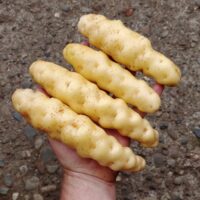 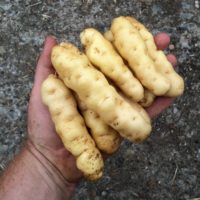 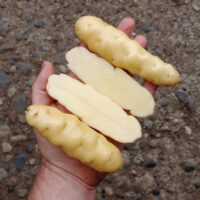 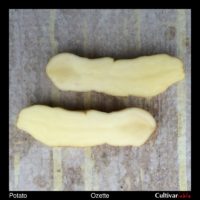 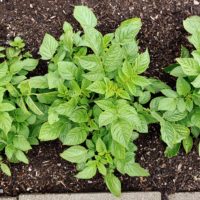 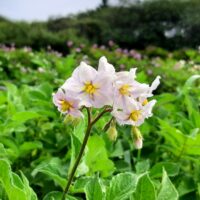 Ozette is a Pacific Northwest heirloom variety with a unique history.  It is probably one the first potatoes introduced to North America. It was most likely brought from Chile (possibly via Mexico) to the coast of Washington in the late 1700s by Spanish explorers, who built a fort and then left after a year.  This distinguishes it from other early introductions to the USA, which came to the east coast via Europe and later from South America.  The native Makah people carried on growing the potato, until it was recognized and made commercially available in the 1980s. Ozette has a lot of great qualities. It is delicious, has a unique appearance, and tolerates our Western Washington weather very well.  Reports from other climate regions tend not to be so good and Ozette has a reputation for producing small plants that die back early in warmer areas.  It is possible that part of this reputation could be undeserved though, since Ozette has been grown outside certification programs more often than not and is often infected with viruses.

Normally, I try to avoid offering varieties that are otherwise available commercially, but Ozette never seems to stay in the catalogs for very long and has dropped off the market again in 2020, so I plan to offer it for the foreseeable future.  Haida, Makah, Makah Ozette, and Tlingit are synonyms for Ozette, allowing for the possibility of minor local adaptations that can’t be distinguished with genetic markers.

Ozette is a good all-purpose variety, although it leans more toward the starchy side. Like most fingerlings, it makes a great roasted potato and it boils reasonably well if you don’t overdo it.

Ozette makes a pretty large and sprawling plant, growing about three feet tall, but with a stem length sometimes double that.  In warm, dry weather it tends to make a smaller plant. It is a late variety, harvestable any time after about 100 days in our climate, but the best yields are achieved by letting the plant grow until it is killed by frost. The tubers continue to grow larger the longer the plant grows. Some growers will prefer to harvest at 14 weeks, which gives a nice crop of four to five inch fingerlings. Left to grow until natural senescence, the tubers can grow longer and wider, sometimes losing the fingerling shape. Yields average about 2.5 pounds per plant under our conditions with an average tuber count of 28. Tubers have strong dormancy and store well for at least four months. If you need to store them longer, keep them in a perforated plastic bag in the refrigerator.  The plants seem to have fairly good resistance to early blight.  Ozette also seems to tolerate common potato viruses, performing pretty well even when infected with leafroll or PVX.  Ozette has low resistance to late blight – progress is slower than in totally vulnerable varieties, but not enough for the plants to make it to the end of a long growing season.

Ozette has very poor sexual fertility and it is notoriously difficult to breed with, although it can be done. The flowers tend to drop even before they open and those that do hang on tend to fail even if hand pollinated. Ozette is also male sterile, so it requires a pollinator to set true seed. Early and frequent hand pollination and favorable weather will occasionally produce a berry.

I have never managed to produce enough TPS for sales, but if I do in the future, I will offer it.  Seedlings from Ozette have been quite diverse, with about a quarter retaining the characteristic shape of Ozette.