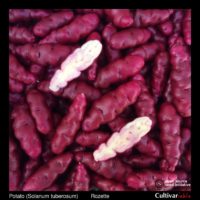 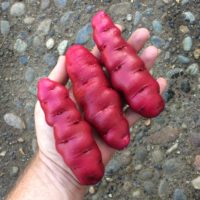 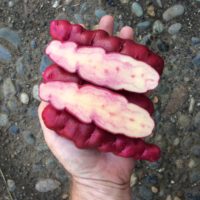 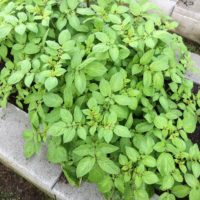 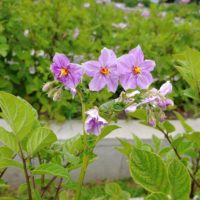 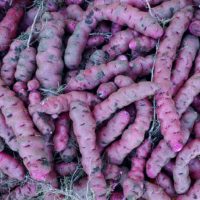 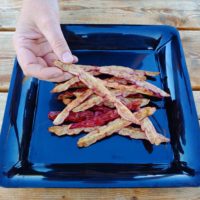 Because some Rozette tubers grow very long, large packets may only contain three tubers instead of the usual five.  They will still give the same number of plants (12-15) when cut into seed pieces.

Rozette is a Cultivariable original variety introduced in 2018.  It is a long, red tetraploid fingerling with white and red flesh.  This variety was selected from progeny of the Pacific Northwest heirloom variety ‘Ozette.’ Ozette is probably one the first potatoes introduced to North America. It was given to the Makah people of the Olympic Peninsula by visiting Spanish explorers in the late 1700s. Ozette has a lot of great qualities. It is delicious, has a unique appearance, and tolerates our Western Washington weather very well. Unfortunately, it has very poor sexual fertility, so it is really difficult to breed with. The flowers tend to drop even before they open and those that do hang on tend to fail even if hand pollinated. I tried for years to make crosses and finally got two berries to hang on in 2016. I grew the seeds from those berries and selected Rozette as the best of the bunch.  Many of the traits that like I like in Rozette are those that it shares in common with its parent. It has a similar size, shape, flavor, yield, and maturity to Ozette, but with deep red skin and white flesh with just a bit of red in it.

Rozette probably makes the cut for an all-purpose variety, although it leans more toward the starchy side.  It really shines roasted in its skin.  The floury flesh becomes surprisingly yellow when it is cooked in dry heat.  It retains it skin color when cooked.  Rozette makes an incredible rustic french fry.  Just scrub, quarter the tubers lengthwise, and fry.

Rozette makes a pretty large and sprawling plant, growing about 30 inches tall.  The stolons are longer than most commercial varieties, usually about a foot long.  It is a late variety, harvestable any time after about 100 days in our climate.  The tubers continue to grow larger the longer the plant grows.  Some growers will prefer to harvest about a month after flowering, which should produce tubers about six inches long.  Left to grow until natural senescence, most tubers will grow about 10 inches long, but I have seen a few as long as 14 inches.  Yields average a bit less than 2 pounds per plant under our standard conditions with an average tuber count of 14, but I have achieved an average yield as high as 4 lb 2 oz per plant on a 14 inch spacing with drip irrigation.  Tubers have strong dormancy and store well for at least four months.  If you need to store them longer, keep them in a perforated plastic bag in the refrigerator.

From a breeding perspective, Rozette flowers heavily but holds berries poorly, so it is much easier to work with than Ozette, but still more difficult than the average potato. Rozette is also male sterile, so it requires a pollinator to set true seed.  With consistent hand pollination over two months, I was able to collect about a gallon of berries from 64 plants.

It appears to me that Rozette has strong resistance to early blight.  I have never observed a lesion even when adjacent varieties have been infected.  I have also not seen any infection with late blight, although late blight is not as common here.  Tubers are somewhat vulnerable to jelly end, a physiological condition that occurs under conditions of uneven soil moisture.

Rozette TPS was collected in 2019 and 2020.  Flowers were pollinated with bulk pollen from tetraploid potato varieties and Solanum curtilobum, so the progeny will be very diverse.  About one seedling in twelve has a similar fingerling shape.  As the second generation out, Rozette TPS will have 1/4 Ozette genetics.  Large seeds germinate well and produce robust seedlings.