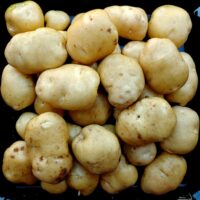 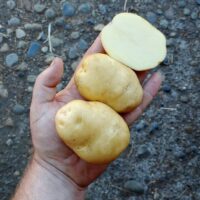 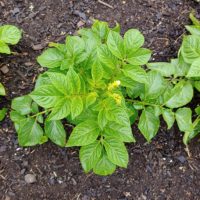 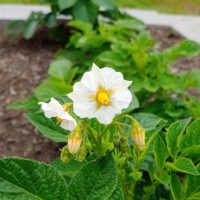 The Lumper or Irish Lumper is a European heirloom potato variety dating to 1806.  It is the potato that was probably largely responsible for the Irish Potato Famine. This variety was once grown as a near monocrop in Ireland, where it was valued for its high production. Peasant farmers were reported to eat ten pounds or more of this potato per day.  Unfortunately, it lacked any resistance to late blight, so when blight was introduced to the country, it spread quickly and ruined the crop. With no resistant alternatives at hand and a system of agriculture dependent on this single potato, disaster followed.

There is clearly a lot of interest in this variety.  It comes in near the top of the list of potatoes that people email me about.  I have grown it a few times, mostly to produce some true seed, but I don’t plan to put it in the regular rotation.  Unfortunately, it just isn’t a particularly tasty variety. The flavor is nothing special and the texture occupies a piece of unsatisfying territory between waxy and floury. If you live in a place where you can grow it, it does produce well. Unfortunately, Lumpers have no resistance to common potato diseases. If you live in a part of the west with dry summers and no local sources of blight, you can probably do fairly well with this potato. If you live east of the Rockies, you’ll need some luck to keep it from running out in just a year or two.

Lumpers are medium to large potatoes with a fairly neutral flavor and an all-purpose texture that tends to be a little watery. The tubers have moderately deep eyes and a thick skin. This potato is probably at its best mashed or in soups or stews.  As is often the case, the more that you like the story of this potato, the better you will probably find the flavor.  While I don’t enjoy this potato for eating plain, it works fairly well for traditional Irish recipes like boxty and colcannon, which shouldn’t be too surprising, I suppose.

Lumper plants are large and late. The longer that you let them grow, the better the yield, but late blight sets in during the late summer and early fall in much of the country, so you may find it better to sacrifice some yield and harvest them early.

This variety is difficult to maintain.  It has no resistance to most of the common potato diseases.  Blight is typically the main problem, but it also accumulates viruses easily and is very vulnerable to the common Potato Virus Y.  It is also fairly vulnerable to scab and jelly end under dry conditions.

Lumper is is self fertile.  It is one of the few remaining European varieties with Andean cytoplasm (along with Pink Fir Apple and Fifty Fold).  Andean potatoes largely have cytoplasm in the M-A-P complex, which does not impose male sterility.

Tom Wagner has mentioned several times that he finds this variety valuable for breeding.  That makes sense.  It is a high yielding potato and crosses with varieties that have better disease resistance will result in some immediate improvement and Lumper’s all purpose texture could easily be pushed toward waxy or floury with the right partner.  It could be used to introduce day neutrality and higher yield into Andean potatoes without transmitting male sterility.

True seed of this variety was open pollinated and probably mostly selfed, although I pollinate all plants with mixed pollen, so there should be some outcrossing as well.  It should be a good source of Lumper genetics for breeding without the difficulty of keeping the tubers disease free.