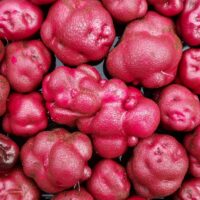 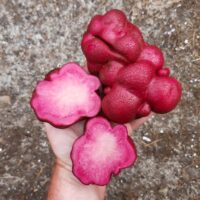 Lookin’ Llumpy is one of the first promising results from a project attempting to produce a potato similar to the famous Andean variety Llumchuy Waqachi that will grow better in the long days of summer in North America.  This is definitely an improvement, although not everything that I want.  It grows larger tubers, earlier, and with a much better yield.  It has beautiful red flesh and good flavor.  The cross that produced this variety was Loowit x (GB seedling x Llumchuy Waqachi) and the name reflects that parentage.

At full maturity, tubers fall into the 3-8 inch range.  They get impressively lumpy as they grow larger, but not with the same depth of eyes as in Llumchuy Waqachi.  Flavor is good, strong but not bitter and texture is on the starchy side.  The skin is thick and chewy.

Plants and large and late.  Yields of two to six pounds are possible at full maturity.  This is a tetraploid variety and is self-fertile.  Plants flower abundantly and set plenty of seed.  Tuber dormancy is long.  This one is more vulnerable to scab than I usually like, but you can’t always get everything you want in a cross and I consider the other traits more important.