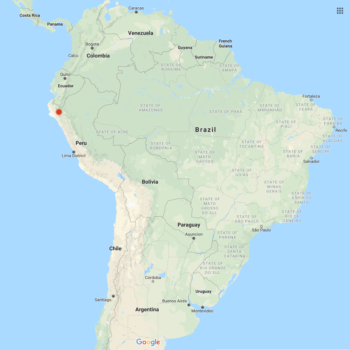 Solanum paucissectum (paucissectum means “poorly dissected,” referring to the leaflets) is a wild potato from Peru.  Plants are usually low-lying, sometimes as much as two feet tall.  Flowers white to light blue.  Berries small and ovoid.

Jarvis (2008) predicts that this species will lose 95% of its present range by 2055 due to climate change, most likely entailing a critical loss of genetic diversity.

Vega (1995) found that this species is much more frost tolerant than domesticated potato.  This is often true in low growing species.

I have found no accounts of glycoalkaloid content for this species.  Tubers that I have tasted were mildly to moderately bitter.

I have found this species difficult to germinate and with poor seedling survival, but that could be a consequence of choosing the wrong accessions.  I have now managed to get enough seedlings to propagate from the two USDA accessions, so we’ll hopefully soon be able to test fresh seed.

The following accessions were examined to prepare this profile.  I have evaluated 3/3 accessions currently available from the US potato genebank.

Poor and irregular germination and weak seedling growth.  It did eventually produce a few healthy plants though.  White flowers and green stems.

An in vitro accession from Piura, Peru.  Certainly the easiest way that I found to grow this often difficult to germinate species.  Blue flowers and dark stems.  CIP public domain MTA.