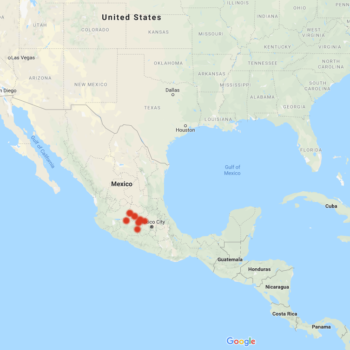 Solanum pinnatisectum (pinnatisectum meaning that the leaflets are not completely separated) is a dryland species from central Mexico with long, thin leaves.  This sort of development occurs also in South American species growing under similar conditions, such as S. peloquinianum.  It is interesting to observe how widely separate plants adapt to conditions in a similar fashion.

Plants about 15 to 24 inches tall.  Unusual berries with dark green stripes and lots of white speckles.

Some accessions of this species carry the Rpi1, Rpi2, and Rpi-blb3 genes, which confer late blight resistance.

I initially found this species difficult to germinate, but it turned out to just be an accession with unusually low germination.  Other accessions have germinated easily using standard conditions.  The USDA potato genebank has observed that germination of some accessions of this species is inhibited by GA3 (Bamberg 1999).  In the wild. plants flower and fruit from July to September (Spooner 2004).

Trapero-Mozos (2018) determined that this species will tolerate a temperature of 40 C even without prior acclimatization to warm temperatures.