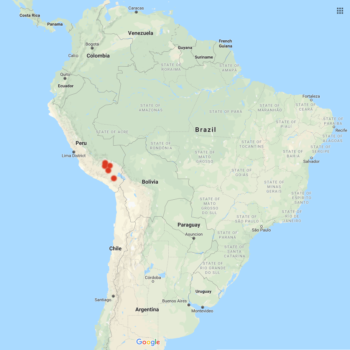 Solanum raphanifolium (raphanifolium meaning that the leaf shape is similar to Raphanus, radish) is a wild potato species from southern Peru.  This species can survive frosts down to 26 degrees F (-3.5 C) (Li 1977).  Vega (1995) found that this species is more frost tolerant than domesticated potato.

This species has very attractive, large, and abundant flowers and might have some potential as an ornamental.

Kiszonas (2010) measured the tuber pH of wild potato species and found that S. raphanifolium has the highest pH among species tested, at 6.07, tying with phureja type domesticated potatoes.  It is not known if tuber pH has any agronomic significance.

Johns (1986b,1990) found glycoalkaloid levels ranging from 28 to 70mg/100g for five accessions of S. raphanifolium.  The primary glycoalkaloids were solanine and chaconine. The lower end of this range is close to the safety zone, so it may be possible to select edible varieties of this species.

I have found this species slow and difficult to germinate.  It may require different conditions than the standard for S. tuberosum.

S. raphanifolium has been used in domesticated potato breeding, including the varieties Krantz (Plaisted 1989), Itasca, and Russet Nugget (Love 1999).