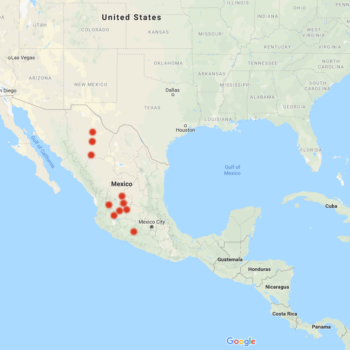 Solanum stenophyllidium (stenophyllidium meaning narrow leaves) is a Mexican species, ranging from central Mexico north almost to the US border.  Highly variable in size and form.  Plants range about 9 to 27 inches tall.  Long, thin leaves, similar to many of the Mexican dryland species.

Bamberg (2017) found a 56% increase in seed set in this species with supplemental applications of liquid fertilizer at four and seven weeks after potting.

Trapero-Mozos (2018) determined that this species will tolerate a temperature of 40 C even without prior acclimatization to warm temperatures.

Watanabe (1991) found that 25% (although only 2 plants) of varieties of this species (as S. brachistotrichum) produced 2n pollen and Jackson (1999) found 7-13%, which would be effectively tetraploid and 2EBN.