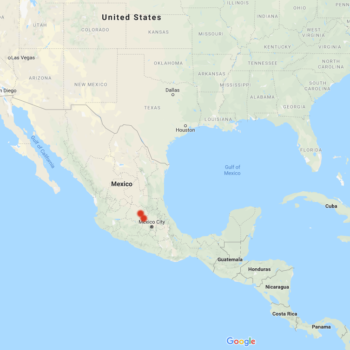 Solanum x sambucinum is a nothospecies (a naturally occurring hybrid) from Michoacan, Mexico. Thought to be a cross of S. ehrenbergii and S. pinnatisectum. Plants roughly one to two feet tall. White flowers. Round berries.  White tubers reaching about 2 inches in diameter on stolons from about 2 to 16 inches in length.

The specific epithet, sambucinum, refers to a similarity to elderberry, although it is hard for me to see any significant resemblance.  While there is no completely standardized pronunciation for scientific names, the most common way to pronounce this species is probably so-LAY-num cross sam-BOO-sin-um.

Jarvis (2008) predicts that this species will lose 95% of its present range by 2055 due to climate change, most likely entailing a critical loss of genetic diversity.

I have found no information about the glycoalkaloid content of this species, but the tubers are mildly bitter, so they are probably on the high side.

Cultivation is essentially the same as for other North American diploid species.  Plants reached senescence here in about 18 weeks.  Yield per plant was 13 ounces.  Tubers remained dormant at room temperature for eight months.

The following accessions were examined to prepare this profile.  I have evaluated 1/1 accessions currently available from the US potato genebank.

Collected in Querétaro Mexico in 1993.  This is the only accession currently held by the US potato genebank, so there is no possibility of seed production, although it does seem to cross pretty easily with other 1EBN diploids.