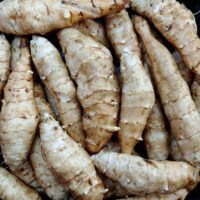 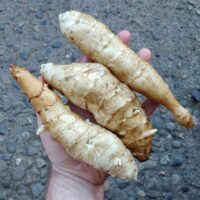 Normally, I offer sunchoke tubers in packets of three, but a lot of these tubers are really big, so you might get two instead.  Even with two tubers, you could easily cut them up for half a dozen plants or more.

I’m not sure how to advertise this, other than as a nice sunchoke with large, smooth tubers.  That was reason enough for me to decide to continue growing it.  Otherwise, it is a bit of a mystery.  It came labeled as Chinese Helianthus strumosus.  H. strumosus is a relative of the Jerusalem artichoke (H. tuberosus) and is compatible for breeding with it.  I have grown H. strumosus for years and the tubers taste much like Jerusalem artichoke but are typically much smaller.  This plant has tubers that do look a lot like scaled up versions of H. strumosus tubers, but they are also not much different from the form of many wild sunchokes.  The foliage does not look like H. strumosus to me, although it does have some slight differences from my other H. tuberosus cultivars.  It is possible that this might be a hybrid of the two species.  It is equally possible that it is just an H. tuberosus variety.  I also can’t say if its suggested origin is correct.  It might be Chinese.  There has been a lot of work with this crop in China in the past decade, so it is certainly possible, but I will probably never know, unless one of you out there knows the history of this variety.  So, there you have it: a nice sunchoke of uncertain species and uncertain origin.  Also offered under the name ‘China’.

This variety tastes like a sunchoke.  I don’t find that most varieties differ much in flavor and this has the standard sunchoke flavor.  Tubers are large and smooth, which may make it better for some kinds of preparation.  If you need foot-long, half-pound sunchokes, this variety can produce them.  With the uniform size and shape, I think this would be a good one for pickling, which is one way to defuse sunchokes if you find them hard to digest, as I do.

Chinese is a tall variety, reaching more than ten feet tall here and probably taller in warmer climates.  The stolons range about 10 to 16 inches long, so it will spread if you don’t harvest carefully. It flowers moderately and sets seed with a pollinator.  It appears to have less late season fungal disease here.