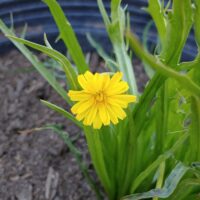 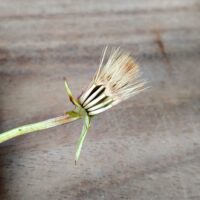 Murnong or yam daisy (Microseris walteri) is an Australian daisy relative that produces an edible, tuberous root.  It was (and still is, to some degree) an important staple food to indigenous Australians.  As with many of the sensitive plant and animal species of Australia, it was greatly diminished after the introduction of European species to the continent.  I would classify Murnong as a semi-domesticated plant at best.  It appears to have been mostly a wild plant, with some amount of human management, such as the clearing of fields by fire to encourage its growth.  It is very similar to yampah in this regard.  It is a short lived perennial, with some plants that die after flowering in the second year and others that persist for as much as four years.  The roots are small, generally smaller than your little finger, but they are crisp and sweet.  They are edible raw or cooked, but more enjoyable cooked in my opinion.  Keep your expectations modest, as this is not a plant that produces a lot of food.  You would have to grow hundreds of plants to get a few good meals out of them.

My population includes seeds from three sources, only two of which were likely M. walteri.  I suspect that the third was M. lanceolata, a species that has a more bitter tasting root.  Taxonomy of this species has only recently been clarified, and Murnong is often described as M. lanceolata or M. scapigera, but the species that was most commonly eaten is now thought to be M. walteri.  Once I tasted the bitter plants, I took them out of the breeding pool, but occasional bitterness has appeared throughout the population, which I take as evidence that the plants have cross pollinated.  That’s probably not a bad thing, given how little genetic diversity is available in the USA.  I have done some gross selection within this population, first and foremost for plants that flower, as many of them were reluctant to do so in this climate.  I have also done a little selection for larger, less forking roots.  I would not consider this selection to be a great accomplishment at this point and I expect that it will take many more years and probably access to more genetic diversity to make much progress.  Nevertheless, it should be a fair foundation for further breeding, particularly if you live in a cool climate where the unselected plants are slow to flower.

Start in pots outdoors in spring after threat of frost has passed.  I plant them vertically and cover by 1/4 inch.  Germination is irregular.  They transplant easily and I like to wait until they have three sets of leaves.  There is something to harvest after four months, but most keep growing until the end of the season here and will flower in the first year if given enough time.  I’d guess that the roots will survive USDA zone 7 winters, but probably not much colder than that.

Only a small amount available this year.  I didn’t expect to offer it, but I ended up with more seed than I needed.  As with any of these really experimental crops, I grow small amounts and there is no guarantee that it will be back in stock any time soon once I run out.