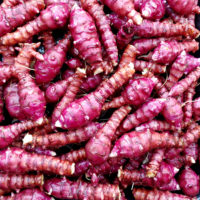 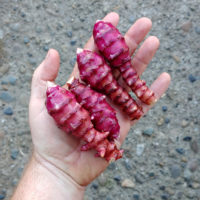 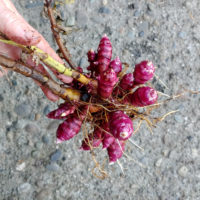 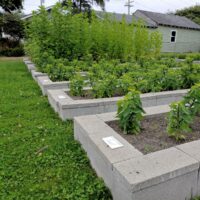 Sunchokes have a lot going for them.  They produce a lot of tubers and they are also very easy to grow.  They mostly take care of themselves, even when neglected for years.  Unfortunately, these resilient characteristics could also be described as weedy.  Sunchokes can easily get out of control and take over.  Once they are established, it can be hard to get rid of them.  One of the biggest problems is that they form long rhizomes and spread where you can’t find them all.  Here is the solution!  The dwarf sunchoke is a short, compact plant with no stolons and thus no tendency to spread.  It is also small enough to be grown in a pot.

This variety was bred by SVP Wirrsum in the Netherlands in the 1980s.

The flavor of the tubers is fine, which is to say that it is virtually indistinguishable from the flavor of any other sunchoke as far as my palate is concerned.  Tubers are small to medium-sized, red/purple, moderately to extremely knobbly.  This variety is not suitable for peeling due to the irregular surfaces.

Plants are very short, reaching about 18 inches tall at maximum.  Tubers are connected directly to the base of the stem.  Flowering is brief, often terminating in the bud stage.  Seeds are occasionally produced, but have so far yielded no seedlings.  That’s a shame because it would be really nice to breed a similar variety with smoother tubers.  The directly attached tubers and the poor sexual fertility make me wonder if this might be a sunchoke/sunflower hybrid.  Directly attached tubers are pretty characteristic of such hybrids.