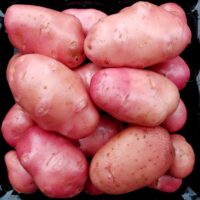 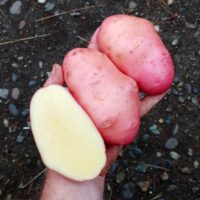 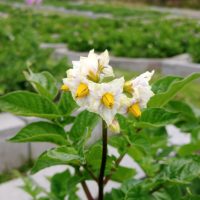 Desiree was introduced in 1962 (from a cross of the varieties Urgenta and Depesche) and has become a common and popular variety, more so in Europe than the USA, but it is one of the rare varieties that is grown all around the world.  It has pink skin and light yellow flesh, uniform tubers, and a large average tuber size.  I think it is one of the better flavored heirloom varieties and it seems to have fairly good tolerance for many of the common potato diseases.  Because it is widely available and self-compatible, this is often one of the first varieties with which people have some success obtaining true seed.

I generally don’t offer tubers.  You can find certified tubers of this variety at the major seed potato suppliers for a better price than I could offer.  I do sometimes offer true seed of this variety.

I am rarely impressed by the European heirloom varieties, finding them often fairly bland, but Desiree is a very good potato.  It has an all purpose texture, leaning a bit more to the waxy side of the spectrum, but is suitable for baking, boiling, or frying.

Desiree is a mid season potato with medium size plants.  (It is sometimes described as having a late maturity, but it is definitely not late here and has a decidedly determinate habit.)  Yields are generally excellent, particularly for the relatively small size of the plants.  Tubers are uniform and reach six to eight inches.  This variety has pretty good resistance to drought and the tubers generally come out uniform even when soil moisture is uneven.  Stolons are short.  Disease tolerance seems pretty good in this variety.  It has good resistance to the original strain of PVY and some resistance to powdery scab.  Desiree flowers and sets berries readily, but the flowering period is brief and the number of flowers per plant is low.  Desiree is self compatible but also has T type cytoplasm, which probably indicates that it has nuclear genes that restore sexual fertility.

True seed of this variety was open pollinated and it grew in a block with other yellow flesh varieties.  From experience, I expect mostly reds, whites, and yellows, with a mix of light yellow and white flesh.  There should be a smaller number of other colors from outcrossing as well.  Somewhat slow germination, probably indicating that this seed has some dormancy.