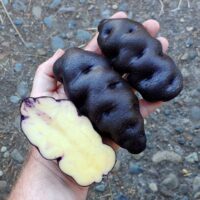 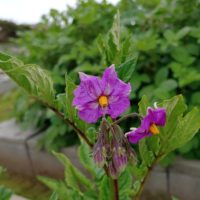 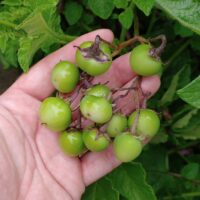 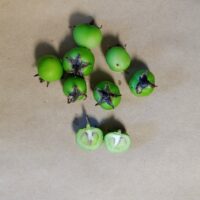 Tumiri was collected in Peru in 1970.  Tubers are round to pear-shaped with deep eyes.  Skin is dark blue, almost black, and the flesh is light yellow with a little bit of blue, sometimes forming a ring.  This is an example of an interesting sideline in domesticated potato evolution.  This variety belongs to a group that was once recognized (and perhaps still is, depending on where you are) as a separate species: Solanum x chaucha.  The most modern system of classification considers them to be just a triploid variant of the Andean domesticated potato.  There are more than 100 varieties in this group in the Andes, but very few have made it to North America, presumably because triploids generally aren’t of much use for breeding.

Tumiri has a fairly bold potato flavor, just short of bitter.  The texture is light and floury with thick skin, like a baking potato.  Tubers tend to be fairly small, in the two to three inch range, five to six inches at the upper end.  Like most smaller tubers, they are probably at their best when roasted.

Plants are fairly compact, more similar to diploid than tetraploid plants.  The plants produce large numbers of purple flowers and set berries very easily.  Tuberization is day neutral and stolons are short, with many tubers forming directly under the plant.  This variety has shown some resistance to powdery scab in trials.

While Tumiri forms berries readily when pollinated by domesticated diploids, those berries contain few or no seeds.  I might be able to scrape together enough seed for a few packets a year, but it remains to be seen whether that is a worthwhile effort.  The seeds do germinate successfully, although somewhat slowly and with many low vigor seedlings.