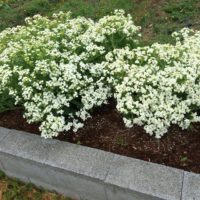 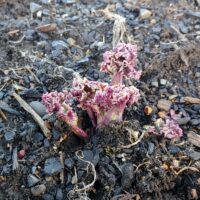 Piedras Blancas is a lighthouse sea kale. Sea kale has naturalized at a few beaches along the west coast of the USA, mostly near lighthouses. Preeminant edimentalist Stephen Barstow suggested that sea kale is probably found near lighthouses because they often had gardens in their early years, before the communities around them were well established, and sea kale was well suited to growing in seaside conditions. These populations most likely escaped their gardens in the late 1800s and early 1900s. The light at Piedras Blancas was opened in 1875. This variety was established from a cutting taken from a plant growing landward of a rocky outcrop at Piedras Blancas, near San Simeon, California.  Piedras Blancas forms a relatively compact plant, green overall, slightly purple in the early growth.  Given the environment where it naturalized, it may be somewhat more drought tolerant than other varieties.

I don’t grow the lighthouse sea kales in large amounts.  They are historically interesting and might contribute valuable genetics, but they are not superior producers.  That’s not to say you won’t get good results from them.  You would probably only notice differences in yield between one variety and another if you are weighing your harvest.