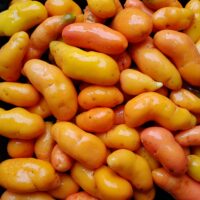 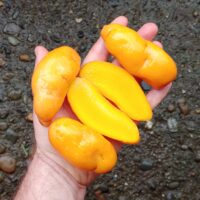 Claquato is a Cultivariable original variety, introduced in 2019.  It is the result of an attempted cross between Cusco Market and BK10425.2.  It is notable for large average tuber size, well clustered tubers, and a mild flavor.

Like all ulluco, Claquato has a beet-like, earthy flavor, but it is not as strong as that of some varieties.  It is also not as mucilaginous as many varieties and it bakes and fries well, producing a result with a moist, almost squash-like texture.  The orange color is retained well in cooking, inside and out.

Claquato plants are large and spreading. They will produce tubers over about an 18 inch radius at maturity. As with most ulluco varieties, the largest tubers are those found directly under the plant, while tubers formed on descending stolons are later and, therefore, usually smaller. The large central tubers of Claquato cluster very closely, which makes them easy to harvest.  Average yield is 1.7 pounds at mid-November. Maximum tuber length is 5.2 inches. A larger portion of the yield is made up of the large central tubers than is the case for most varieties.  Color develops with maturity, first white, then yellow, and finally orange.