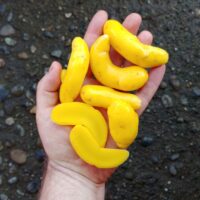 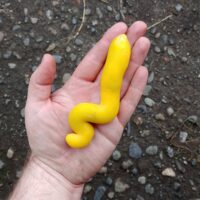 Lilliwaup is a Cultivariable original variety, introduced in 2020. It is notable for producing a very large number of small tubers and a more mucilaginous texture, making it a good soup ulluco.

Lilliwaup has a more mild flavor than many varieties, not as powerfully earthy.  The texture is very smooth.  Tubers are mostly bite sized and yellow inside and out, although it does produce some large tubers and those tend to be really unusual shapes, often semi-circular or even long and serpentine.  The size and texture make it an excellent soup variety, needing only to be rinsed and thrown into the soup pot, where it will thicken the broth while also holding together even with long boiling.  The yellow color is lost with long boiling, but retained with dry cooking.

Lilliwaup plants are large and spreading and will produce tubers over about an 18 inch radius at maturity.  As is usual for ulluco, the largest tubers are formed under the center of the plant, while tubers formed on descending stolons begin much later and are smaller.  Lilliwaup can produce per plant tuber counts in excess of 200, with most of the tubers between one and two inches at full maturity.  Average yield is 2.4 pounds at mid-November.  Color develops with maturity, starting as white and darkening to yellow.