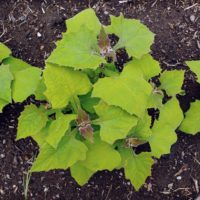 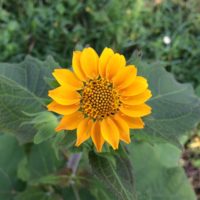 Smallanthus x scheldewendekensis is a yacon hybrid grown from crosses made by Frank van Keirsblick between yacon and Smallanthus riparius.  As with any cross with a wild species, there is really no way to establish if this variety is safe to eat.  I and others have eaten it and didn’t get sick or die, but that is really no guarantee.  It does make storage roots.  They are longer and thinner than yacon roots, but they taste quite similar, perhaps with a bit more piney/resiny flavor.  Again, you probably shouldn’t eat them.  I consider this plant more interesting for breeding work.  It may be useful for crossing back to yacon or to bridge to other Smallanthus species.  I had no luck attempting to pollinate it from yacon, but I have obtained a few open pollinated seeds, so it is not totally sterile.  What you get differs from year to year because the plants don’t always produce crowns well.  This year (2022) they did, so you get three crown divisions.