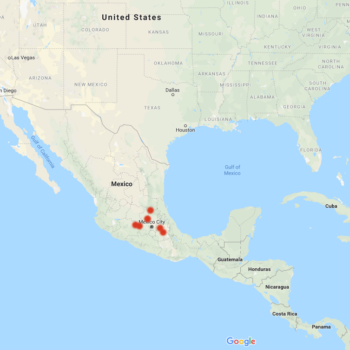 Solanum polyadenium (polyadenium means “many glands,” referring to the glandular hairs of this species) is a widespread, woodland species in central Mexico.  Plants range from about a foot to 4.5 feet tall.  Leaves are densely covered in glandular hairs.  White flowers.  Round fruits.  Tubers narrow and sometimes coiling but can grow more than a foot long, the largest of any wild species according to Correll (1962).

Pelletier (1999) found that Colorado potato beetles have increased adult and larval mortality and low egg production on this species.

I have found this species difficult to germinate using the standard conditions for S. tuberosum.  The USDA potato genebank has observed that some accessions of this species are dependent upon GA3 for germination (Bamberg 1999).

Watanabe (1991) found that 6.2% of varieties of this species produced 2n pollen, which would be effectively tetraploid and 4EBN.