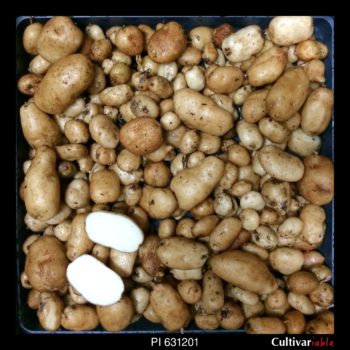 TPS.  Tubers small, mostly less than one inch, rarely as much as three inches. Oblong/flattened. Mostly russet. Stolons extremely long, some as long as four feet. Tuber yields small, less than 10 per plant. Additional tubers may have been formed on long stolons below the depth dug (about 14 inches). Some plants did not tuberize by the end of October. Prolific berry production.  Tubers intensely bitter.

A true seed accession of S. juzepczukii seemed unlikely, but there was only one way to be sure.  This did not behave like a cultivated potato or even like what one might expect from a wild cross between S. acaule and S. tuberosum. Based on a clue in a paper that referenced the VIR accession number, I think this is actually S. aracc-papa = S. sparsipilum = S. brevicaule, which is a very good match for the traits observed in the plants. Corollas light blue to purple, many interjected leaflets, many plants more than two feet tall, very long stolons, and successful crosses yielding large numbers of seeds with both diploid and tetraploid S. tuberosum.