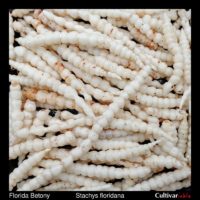 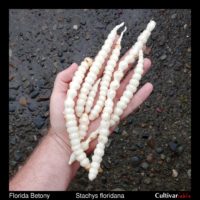 Florida betony (Stachys floridana), is very similar to Chinese artichoke, but with a bit sharper flavor.  As one of the few root crops native to North America, it should be better known and appreciated.  Many millions of dollars are spent every year in Florida and Georgia, trying to poison this plant out of existence instead of eating it.  Tubers reach a maximum of about 12 inches in length, although more typically about 6 to 8 inches.  May tolerate more heat than Chinese artichoke, although it has no more drought tolerance.  Keep it well watered for the best yield.  Plant or pot immediately on receipt; they don’t keep very well out of the ground.

I strongly recommend growing this plant in pots.  Also, grow only one clone if you don’t want the plants to set seed.  Florida betony has a well deserved reputation for growing out of control.  I have not found this to be the case here.  In the west, it needs watering in the summer and does poorly without it, so spread is limited.  In a more favorable climate, it may become a problem plant.  Best to keep it contained. Beside that, tubers are often set rather deeply, so pots are much easier to harvest.

Florida betony is classified as a noxious weed in some areas of the South.  Please check your local noxious weed regulations before ordering.

We grow several different accessions of Florida betony in order to maximize diversity for breeding.  They are not significantly different and if you just want to grow the plant as a food crop, it probably doesn’t matter which one you choose.  Clones A and C were collected in Florida and clone B in North Carolina.

5 tubers or segments of tubers about 2-3 inches in length.