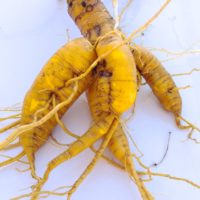 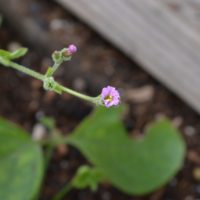 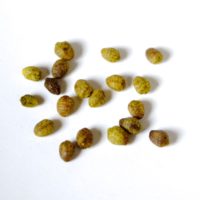 Categories: Everything Else, Mauka (Mirabilis expansa)

Rojo produces clusters of yellow roots.  You might wonder why it is named rojo then.  I find that a little odd, myself.  The leaves and stems have red markings as opposed to pure green foliage on the variety Blanco.  The yellow roots are quite attractive, but we find that this one generally yields less than blanco and its leaves sometimes produce a little mouth irritation if you eat them.  Flowers are purple and produced abundantly in early spring if you can keep the plants alive over winter.  Rojo flowers here about a month earlier than Blanco, so it probably has a proportionally greater critical photoperiod for flowering.  Rojo yields a better crop in its second or third year; it is a little slower to develop than Blanco.

I previously offered mauka caudices, but they had an unacceptably high failure rate.  The standard offering is now tissue culture plantlets.  I produce plantlets on demand with a lead time of about six weeks.  I also offer seeds when I produce enough excess, but that does not happen every year because they are produced individually over a long period of time and are kind of a pain to collect.

Unlike mauka blanco, mauka rojo sets few seeds and may either be self-incompatible or simply have poor pollen fertility.  Seeds are rarely available and I expect that most seeds of this variety will be crosses.  Therefore, the only way to be sure of getting the true variety is to grow from plantlets.