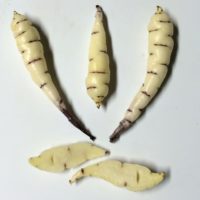 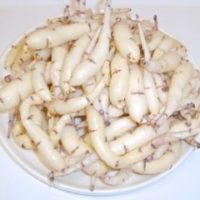 Blanca is an heirloom variety, probably originally from Colombia.  It is also sold under the names Pilifera (which is technically the name of a botanical variety, which is different than a cultivar), Sidney, and Yurac-anu.  This is the most widespread mashua variety in the United States, where it is commonly sold without a varietal name.

Blanca is both slightly sweet and slightly cabbagey.  The cooked flesh is moderately firm and remains white.

Early to emerge in the spring. Plants are tall on trellis, reaching ten feet or more.  This variety has a high yield, with plants on trellis producing 10 pounds or more. Tubers form early but don’t bulk up rapidly, so it needs a mild fall to reach its maximum. This is a fall flowering variety.  All sources of this variety that I have tested have been positive for a Potyvirus.